In my most recent paper, we report on work in which we trained rats to discriminate among 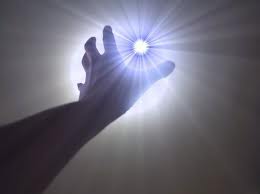 infrared (IR) light sources (normally
invisible to the rat). We coupled the output of a head-mounted IR detector to microstimulators in the whisker region of primary somatosensory cortex.

The rats initally respond to stimulation with a ‘Hey what the heck is this thing on my face?’ type of reaction. For instance, in the following video, you can see an IR light turn on in a behavioral chamber, and hear the output of thecortical microstimulator (which the rat does not hear):

Eventually they adopt new foraging strategies, sweeping their IR sensor around to find IR sources. In the following movie, the rat navigates a behavioral chamber with three ports that contain water spouts, and she must go to the spout in which the IR light is on to receive water:

One question that comes up quite often is whether they experience microstimulation as tactile in nature, or as a new sensory modality. We discuss this in the paper:

Overall, our behavioral results suggest that animals initially treated S1 electrical stimulation as an unexpected whisker deflection, and later they learned to treat it as a stimulus originating away from the body in the surrounding environment. However, we are unable, using the methods in this paper, to determine whether the fully trained rats consciously experienced microstimulation as a novel sensory modality, or simply learned to associate a tactile sensation with an otherwise imperceptible distal sensory cue. This is a question that could presently be addressed with sensory substitution experiments in humans. Indeed, one such study suggests that some subjects experienced tactile stimuli as visual in nature after training with a visual-to-tactile peripheral substitution device (Ortiz et al.,2011).

Note that in the paper, when we say the rats perceive IR light, we use the term ‘perceive’ in its most general sense, which also includes unconscious perception (Marcel 1983). We chose such terminology to remain deliberately neutral about whether the rats consciously experience the new inputs as tactile, or a subjectively different modality.

Source: Thomson, EE,  Carra, R, and Nicolelis, MAL (2013)  Perceiving Invisible Light through a Somatosensory Cortical Prosthesis. Nature Communications. Paper is available here, and lab web site has a page about it with four movies and a link to the penultimate draft.