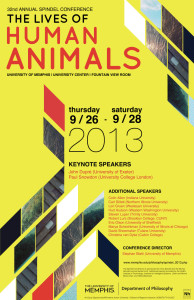 The problem of personal identity is one of the most bewitching puzzles in all of philosophy. Until very recently, most philosophers subscribed to the view first advocated by the 17th-century British philosopher, John Locke. Locke held that our fundamental nature is given by our status as self-conscious, rational agents (“persons”) and that the conditions under which we persist through time and change are thus to be accounted for in terms of psychological continuity. The main topic of the 32nd annual Spindel Conference will be an anti-Lockean view that has recently gained support amongst philosophers. According to this view, known as “animalism,” our fundamental nature is given not by our psychological capacities, but by our biological constitution: we are primates (Homo sapiens), and like all organisms, we persist just in case we continue living.

The overarching aim of this year’s conference is to provide a forum in which metaphysicians and philosophers of mind working on animalism are brought together with those who are presently engaged in pertinent debates in other areas of philosophy—including philosophy of biology, metaphysics, ethics, philosophical psychology, and philosophy of religion. So, besides animalism in its own right, among the topics to be explored are the nature of organic life, the metaphysics and ethics of death, issues in animal cognition, the possibility of the afterlife, animal interests, etc.