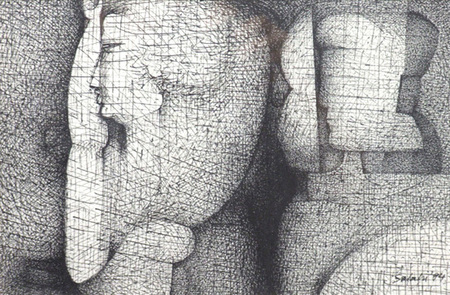 It is a terrifying thing to finish a book and then think of all the points that should’ve been made, all the topics that should have had an airing. I comfort myself with the thought that Outside Color turned out to be quite a slim volume, and I will be forgiven if I need to write at greater length on subjects that I passed over too quickly. I entreat my critics to be charitable and patient!

I have been asked a few times if I will extend my version of adverbialism to other visual qualities, and to other modalities. That seems a natural course to follow but I suspect the devil will be in the detail. Is a burnt, nutty aroma a way that roasting coffee appears to me? Or is talk of appearance already too visual? Should we say that roasting coffee makes itself present to me in that way? Or just that I smell it nuttily and burntly? When we consider smells it is more natural than with colour to think of them being instantiated somewhere between the object and the perceiver. But it is with sounds that it is most natural to talk of properties being instantiated in processes or events, rather than in objects.

It is also worth asking if adverbialism has a role to play beyond the philosophy of perception. One candidate application to social kinds like money, gender and race. It’s a platitude that races are socially constructed properties. Hence they are a sort of relational property. Assuming the adverbial account of races, it follows that they are properties not of individuals, but of the social forces by which people come to be classified as members of different races. This idea meshes well with the trend in social sciences to study the process, racialisation (see e.g. Garner 2009), in preference to any reified notion of race. There is an adverbial construction for race-talk which has some currency at the moment, whereby people are said to be ‘racialised-as-black’ or ‘racialised-as-white’ rather than simply ‘black’ or ‘white’. It seems that there are pragmatic reasons to encourage an adverbial reform of idioms here, unlike with folk chromatic terms which serve us well enough already.

Adverbialism suggests a novel way to think about emergence or non-reductive physicalism, inspired by Sandra Mitchell’s work on emergent properties and the dynamics of biological systems. The idea is that certain ‘lower-level’ physical entities must interact in order for the process which instantiates a colour to occur. Since the colour is not attributable to any one of the low-level entities involved in the process (neurons, photons, electrons of the surface viewed), even the most hard-headed reductionist could not say that colour is just a property of any one of those things. Furthermore, on Mitchell’s account, a hallmark of emergence in biological systems is the presence of feedback mechanisms which maintain processes within their viable range by altering the activity of the lower level components depending on the state of the system as a whole. We can think here of the most familiar homeostatic systems like temperature regulation—releasing sweat from our pores because our whole body is over-heating.

Things become interesting when the feedback is tracking the state of some process which involves multiple lower level entities. It is natural to say that the state of that process is a higher level property which exerts a causal influence on the lower level entities; in other words, an emergent property with its own causal powers. Colours, on the adverbialist account, could well fit this template for emergent properties but it remains to be shown that we have the right kind of feedback loop. A candidate is to think of colour constancy mechanisms in this way.

One feature of Outside Color that I haven’t mentioned so far in these posts is the historical argument that the debate over colour ontology has been radically shaped by the Aristotelian perceptual realism which was the dominant view just before the seventeenth century ‘scientific revolution’. This part of the book was actually the first to take shape (more years ago than I’d like to disclose) and there have been exciting developments in the history of ideas about perception since then. Up until recently, historians largely claimed that Aristotelians were like the naïve realists of today: colours are out there in objects just as we perceive them to be. Anna Marmodoro (2014) argues that Aristotle himself put forward a much more “subtle” kind of perceptual realism, which pairs powers of objects to be seen with capacities of perceivers to see them. In the Fall term a young scholar of sixteenth and seventeenth century theories of vision, Tawrin Baker, will be joining my department as a post-doc and I expect to be informed that the later Aristotelian views were also much more varied and nuanced.

So in a year’s time it may be necessary to revisit this blog and correct my many mistakes. In the meantime, I’d like to say thank you to the Philosophy of Brains administrators and readers for a fun week!