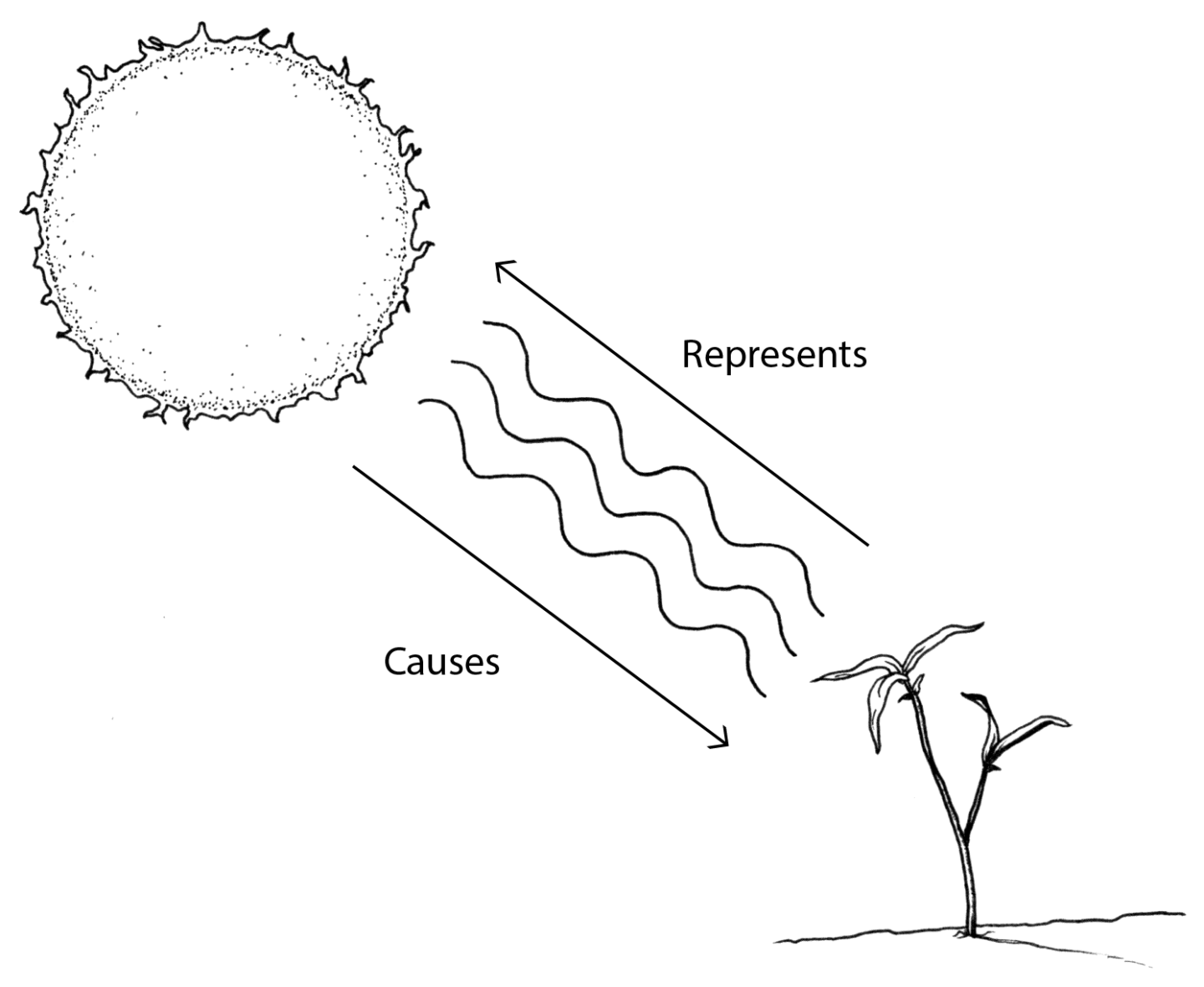 Reading my two previous posts, you might complain that perceiving and remembering require concepts, ideas, or even thoughts, which are basically representations, and plants don’t have those, so they don’t perceive or remember. For the same reason, you might add, they don’t have minds.

Do plants have representations?

Phototropism can seem to involve representation. The sun itself does not arrive at the plant, but exerts itself on the plant by electromagnetic radiation, which makes an initial impact on some part of the plant, the photoreceptors, specialized parts of cells that are distinctively sensitive to light. These initial effects are arguably representations of the sun; not just an effect of the sun, but a sign of the sun. They are, one might say, more or less, like the images formed on the lens of our eyes when we see something. Although we see no image on the surface of a plant when it is being affected by the sun, there is nevertheless something comparable going on—even if it is harder to detect, or not easily seen.

That way of thinking relies on one important theory of what a representation is, of what it is for one thing—such as an image or word—to represent another. Very roughly, the idea is that if X causes Y, then Y represents X. For example, smoke represents fire, because it is caused by fire; wet pavement caused by rain represents rain; a deer’s hoof print represents a deer.

This sort of theory is ingenious, but many smart theorists think it is still wrong, and for the same of reason that the other theory is wrong. Too many things wind up counting as representations. On your average sink, the valve’s job is to open when the knob is turned. But the open valve does not represent a turned knob. In itself, it represents nothing—though, say, a plumber might use an open valve as evidence of a turned knob.

So, although there may be some initially plausible reason to think that plants have representations, the theories of representation that support thinking they do are widely thought to be inadequate.

Here is a good reason to remain doubtful. In explaining and understanding plant behaviors, botanists appear not to have any great need to posit that plants represent the environment external to themselves. Doing so does not provide any significant explanatory gain.

Consider gravitropism in roots. The bits sensitive to gravity, generically called “statoliths,” are amyoplasts, subcellular bodies that sediment at the bottom of special cells, statocytes, in the tips of roots. The amyoplasts are somewhat denser than the rest of the cell, and will accordingly drift to the bottom of the cell. They’re like rocks in a jug of water; turn the jug, and the rocks will drift to the bottom. When the amyoplasts settle on the bottom of the cell, auxin is transmitted to one but not another side of the root, causing differential growth. Here it might be tempting to say that roots grow down because the statoliths represent where down is. As metaphor or shorthand, that way of talking may be fine. But it doesn’t make root growth easier to understand. It does not allow us to understand something that we could not otherwise understand. We can instead say that the root grows that way because the statoliths moved in that direction, which stimulated the production of auxin, and its transmission to one side of the root, causing cells there to expand.

Then again, maybe plants have minds even if they don’t have representations.