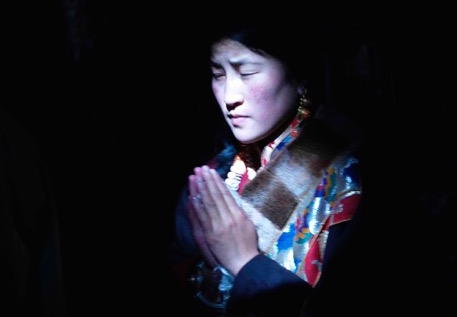 To be immersed, I said in the last post, is for there to be something it is like for me to be in a mental state–it is the phenomenology of a first-person stance. Yet the question “What is it like for me to be in a mental state?” and the question “What is it to be in that mental state?” can hardly be unrelated. In this post I will argue that inhabiting a first-person stance is a matter of normative endorsement, which I label “participation”. I speak of the participant self as the place in which mental states are located: somewhat as all northerly lines meet and end at a single place, so the self is the place from which all one’s experience outwardly intends. A metaphysics of location and locatee replaces that of substance and attribute.

The leading idea in the philosophy of mind of an important group of Indian thinkers is that occupying a first-person stance has centrally to do with the bearing of reason on the whole of one’s mental life. In The Self I discuss, first of all, Praśastapāda’s (fl. 530) five arguments against the thesis that mental states are properties of the body, implying rejection of both materialism and property dualism. I call his arguments the Unity, Spatial Parts, Persistence, Self-Knowledge, and Self-Reference arguments. The arguments are all attempts to give voice to a single thought: that the relationships of participation and endorsement that are implied by the idea of owning a mental state, and so of occupying a first-person stance, are fundamentally different in kind from any relation of physical exemplification. Praśastapāda is already aware of the point Wittgenstein would later make famous when he declares that “Only of a living human being and what resembles (behaves like) a living human being can one say: it has sensations; it sees; is blind; hears; is deaf; is conscious or unconscious” (PI §281).

Emotions have an essential explanatory role in my theory of self. According to an analysis also first advanced in detail by Praśastapāda the core attributes of an emotion are an appraisal, an inclination to action and a capacity to be felt. Pleasure, for example, is elicited by the appraisal of something as likeable or pleasant, is exhibited in an inclination to maintain a continuing relationship with the object, and is felt as agreeable or gratifying or favourable. Desire is elicited by the appraisal of something not at hand as potentially so, is exhibited in an inclination to create a relationship with it, and is felt as a ‘calling out.’ The key role of emotions in the unity of the self consists in their being noncognitive indicators of common ownership—so that, for example, delight is an indicator that a standing desire is now believed to be satisfied, and sorrow the indicator that a standing desire is believed to be unsatisfiable. What this indication consists in is not just a feeling of agreeableness but also, more importantly, an “embracing”, a request or demand for continued commerce, and so to a further propensity to act. Emotions thus serve to signal a relation of common ownership among the commitments, values, preferences and intentions of a single subject. The idea that emotions are noncognitive indicators has an important virtue: it meshes extremely well with the hypothesis that there is a sub personal selector-comparator-integrator mechanism (manas).

For a state to be owned is precisely for it to engage the whole of one’s being through its potential to make normative demands on any other owned state. It is the defining feature of a first-person stance that one occupies and endorses one’s states of mind and is not merely a spectator of them, and so it is from this stance alone that the relationships definitive of liberal naturalism, the pulls of reasons and the demands for action, come into view. The proposal is that items of mind exhibit rational demands only in the context of a subject. Rather than in second natural intentionality, spontaneity is located within the idea of ownership itself.

The best argument for there being subjects of consciousness is that if one’s experience, intentions, preferences and values  are to bear rationally on one another they must stand in a relationship of common ownership and not merely one of common causation. Our philosophers develop this thought in two ways: through an argument first presented by Gautama (c.150–250) at Nyāya-sūtra 3.1.1, that identity of content across sensory modalities requires a unitary subject; and through an argument first presented by Kaṇāda (c.0–250) at Vaiśeṣika-sūtra 3.2.16, that the distinctness of distinct embodied mental lives implies there are distinct unitary subjects.

A unity argument infers the unity of the self from the possible integration of information from distinct sense modalities and perhaps also memory. Several formulations are presented by Nyāya philosophers, some involving recognition, some binding, and some tracking. These are arguments only for unity: none of them sustains any conclusion about simplicity, immateriality, or eternality. I point out that although historically such additional conclusions were drawn, they are neither justified nor necessitated by the argument. Unity arguments are where the inter-relatedness of the integrative, participant, and immersed selves is most fully expressed; or, to put it another way, where participation, immersion, and coordination find joint articulation in the idea of self. I claim that the strongest version of the unity argument is one in which one considers what is required of someone who has the capacity to think of their perceptions in different modalities as perceptions of one and the same object. The conclusion of this argument is that it is necessary for the possession of a first-person stance that one conceives of oneself as an individual, and indeed as an individual who is dependent on a specific physical object, one’s body.

It follows that there is a multiplicity of distinct individual selves. The account of how they are distinct distances the theory from any Cartesian conception of self, which is faced by the threat that in the limit “there is absolutely nothing left to distinguish any Cartesian ‘I’ from any other, and it is impossible to see any more what would be subtracted from the universe by the removal of me” (Bernard Williams). Selves are individuated instead in terms of a common ownership relation obtaining between clusters of commitments, resolutions and intentions, delimited by normative emotional response and implying agency and sentience and so embodiment. An early modern Nyāya thinker will recommend that once liberated the distinction between selves is dissolved, and he thereby preserves individuation by embodied mental life and rejects an earlier doctrine of brute individual difference between selves. This is to agree with a point I stress in the book, that any imagined state of discarnate existence is not the existence of a self, and does not represent the survival of any individual.

To summarize and conclude. There is a self when the phenomenology of one’s occupation of a first-person position is such that its experiential deliverances are in subpersonal coordination with the rational demands imposed by ownership. The self is a unity of immersion, participation, and coordination, the first-person stance at once lived, engaged, and underwritten. So the Ownership View about natural selves may be described as a normative phenomenology.

Thanks once again to John Schwenkler for featuring my The Self: Naturalism, Consciousness,and the First-Person Stance this week on The Brains Blog.