“If he [Descartes] had examined that other, deeper opening upon things given us by the secondary qualities, especially color, then….[h]e would have been obliged to find out how the indecisive murmur of colors can present us with things, forests, storms—in short the world. …. But for him it goes without saying that color is an ornament, mere coloring…….”  — Merleau-Ponty (1964/2001:294)

The quotation comes from the late essay on painting, “Eye and Mind” (“L’oeil et l’esprit”). The context is a discussion of what Merleau-Ponty takes to be a telling omission in Descartes’ Dioptric, a celebrated work on vision, optics and graphical representation. Descartes presents copper engraving as the paradigm of picture making and is silent on the operation of painting. This leaves us with the implication, as Merleau-Ponty puts it, “that the real power of painting lies in design [i.e. line drawing], whose power in turn rests upon the ordered relationship existing between it and space-in-itself” (294-295). Yet, Merleau-Ponty insists, colouring is not mere ornament—it is an “opening upon things” (“ouverture aux choses”).

I found this passage shortly after completing the manuscript for Outside Color. As chance would have it, it captures very nicely one of the central ideas of the book, which is that colour and colour vision are a means of perceiving an array of properties, qualities and relationships amongst objects in the world around us, and that we must break away from the habit of thought that takes chromatic vision to be simply colouring in a pre-given visual world of shapes, textures, boundaries and distances. As Akins and Hahn (2014) put it, chromatic vision is about “more than mere colouring”.

Take, for example, this landscape panorama from the blue mountains. As the hills recede into the distance their colour becomes bluer and less saturated: 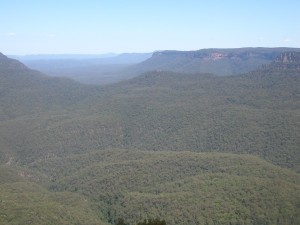 Chromatic vision informs us not just about the colours of the trees, but of their distance from us—an effect noted by perceptual psychologists (Troscianko et al. 1991), and by painters.

Much recent work on human vision has focussed on the interaction between colour and the other visual submodalities like shape, depth and lightness perception. Similarly, Matt Fulkerson has recently written on this blog  about the integration of different streams of touch information which were once treated as separate. My own perspective was influenced, in particular, by findings from Fred Kingdom’s lab at McGill University.  In one review, Shevell and Kingdom (2008) catalogue the evidence that colour vision contributes to all of these important visual tasks:

In my previous post I proposed that the debate over colour ontology has been over-fixated on the question of correspondence, whether anything in our inventory of mind-independent or physical properties corresponds to the colours that we see. My point here is that colour vision allows us to do much more than just experience colour, and that this is so whether or not any property in the external world corresponds to our chromatic experiences. So what colour ontology should we opt for? I will hazard an answer in the next post.

Concluding here, I would like for a moment to consider why Merleau-Ponty speaks of colour as an “indecisive murmur” (“le murmure indécis des couleurs”). I cannot say what the connotations are in the original French but to me the metaphor invokes indistinct speech, the flow of water, rustling matter, or the footfall of distant events. Colours, I first thought, are not at all like this; they are immediate, bright and clearly delineated. Yet when we remember that Merleau-Ponty is writing about colour in painting we may note that hues arranged on canvas, viewed at close range, are typically dappled and varying irregularly within the outline of a surface.

That is because the painting must convey the fine texture of hue and brightness that occurs with the irregularity of lighting and shadow (what vision scientists call “luminance noise”). The painterly eye attends more to the inconstancy of colour than is usual in everyday life, and it is this attention to detail that often makes a painted world so strikingly real. However we can all choose to notice that the colours around us also present themselves in a vague way. For instance, with the play of sunshine on foliage we can appreciate that the greens are murmuring and rippling, not flat and uniform; but still presenting us with the tree.