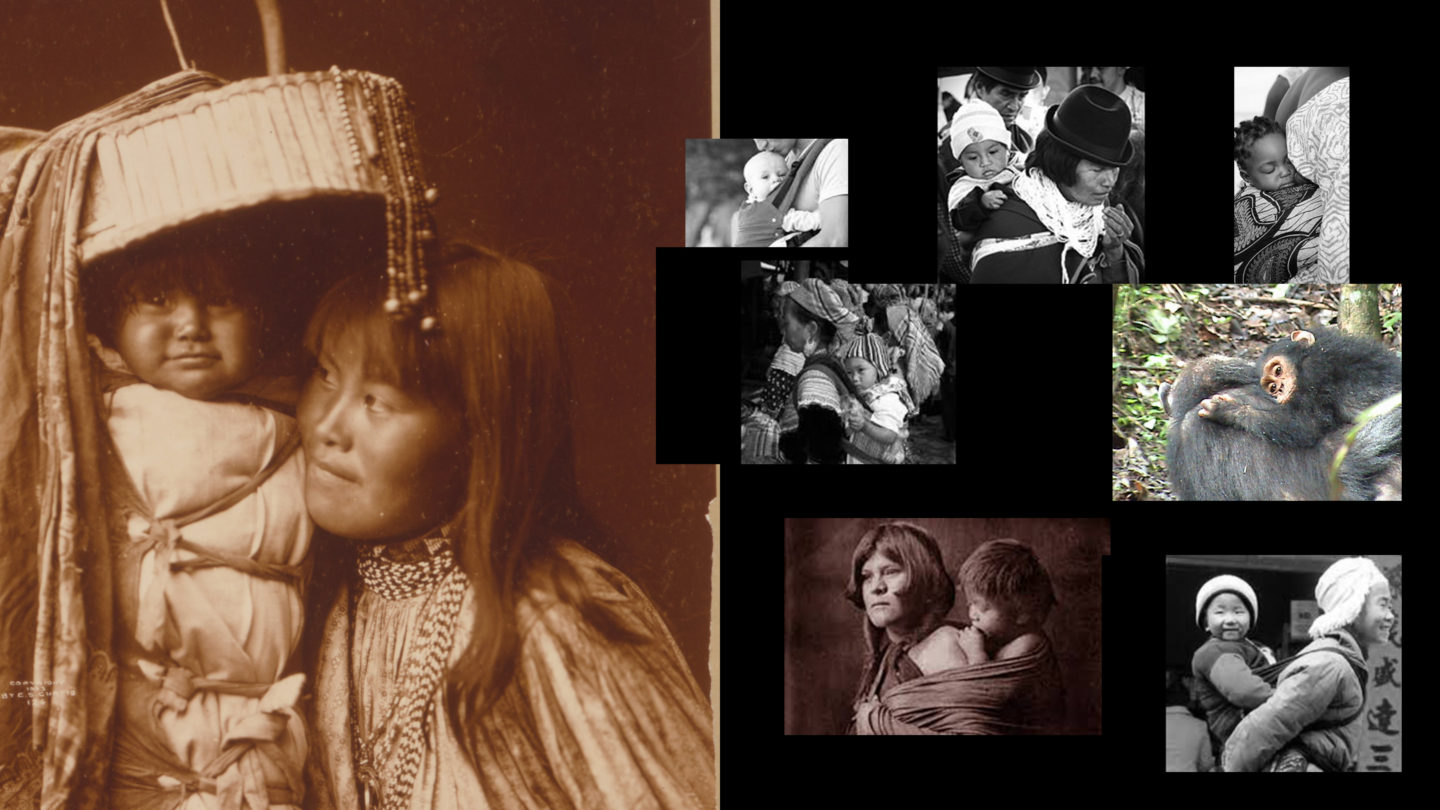 As I mentioned in my first post, I had the opportunity to conduct research at Gombe National Park several years ago. In one of the trips from the national park to town to get provisions (and experience the luxury of a cold soda and indoor plumbing where you are not concerned about snakes), I started thinking about the infants I was seeing around town, wondering what was like to be carried around all day in a sling. This image was strangely familiar; when I was a child my parents had a coffee farm in the countryside in Colombia, and Gumabiano women who lived around the area used a similar style to carry their children. After months of observing mother chimpanzees carrying their infants ventrally and on their backs, I returned to Canada and observed the popularity of sling carriers among caregivers. Thus, infants in close contact with their mothers seem to be a cross-cultural/cross-species unifying factor everywhere I went.

After researching the subject, I found that one of the most wide-spread techniques of mother-infant interaction across human cultures is the mother holding the baby close, providing the infant with constant contact (see Tronick, 1995 for an overview). As argued, this mode of interaction allows infants to develop in ways similar to infants in cultures where face-to-face interaction is privileged. The next obvious question is then, why is this form of interaction so prevalent across cultures and species? What is it about touch that seems to enable the mental development of such diverse groups?

To answer this question I will focus on the differences between vision and touch. There are several elements in this discussion; however, in an attempt to illustrate the main points, I will limit my discussion to what de Vignemont and Massini (2014) consider as the two characteristics essential to touch that are not manifest in other senses (or at least not as prevalent in other senses). The first characteristic is what these authors call “the objectivity of touch.” When we experience an object through touch, we have a clear notion that the object exists independently of us. The authors argue that when touching an object it is necessary to feel the resistance of the external world, to feel that there is something different than myself exerting a counteracting force against me when I touch an object.

Moreover, Klatsky and Lederman (2002) argue that while certain kinds of touch involve only sensory receptors in the skin, haptic touch also includes proprioception (sense of bodily position) and kinesthesis (sense of body movement). When considering haptic touch, we envision an organism that has to reach out and investigate with her body in order to determine which features belong to which objects; on this view, touch is intimately tied to exploratory activity. Fulkerson (2014) (see also his posts in The Brains Blog) focuses on touch as haptic touch, as he argues that is impossible to conceive touch without the involvement of the body. This involvement of the body in haptic touch provides a unisensory form of perception. This means that the sensory features are not described as different perceptions but are predicates of the perceptual object.

When we apply this idea to infant development, it becomes clear that focusing on the sense of touch forces us to see the infant in a more active role where s/he has to “reach out” towards the world and comprehend an object outside themselves that is different from them. Through this investigation touch becomes a sense that provides organism with a sense of objects in the world. Through haptic touch an infant is able to understand that there other objects around her and that there are several features attached to those objects. This seems important for understanding commonalities between the development of infants in both apes and humans because the focus becomes the active role played by the infant instead of a passive one dependent on an active caregiver.

It may be argued that sometimes touch is passive; for example, a mother may caress the infant; therefore, there is no active search. However, even in the perception of passive touch, it may be argued that the infant has to comprehend something about his/her own body to understand that perception. Following our example, the infant has to understand that s/he is still, while the mother is moving, which brings us to the second main difference between touch and other senses.

According to de Vignemont and Massini (2014), the second main difference is that touch can be characterized in terms of bipolarity between the subject and the external world, that is, in every instance of touch presents us with an external world and the awareness of our own bodies.

This approach to touch has been criticized by authors such as Ratcliffe (2012), who argues that touch does not require the experience of contact or boundaries. Instead, he argues that touch is about commonalities and relatedness between people. He offers as an example the case of Nick Yarris, a Death-row inmate, whose isolating experience where there was no human contact made him feel like a “bleak empty vessel.” In my view, this example is the perfect illustration of why touch is about boundaries. When describing this solitude, Yarris tells the story of how he started making his arm numb so that that he would feel a “strange” human hand on his face. If boundaries were not important, Yaris could have hugged himself, but as anyone who has ever tried to console him/herself in this way (or attempted to tickle oneself), knows this is highly ineffective. To count as a hug or a caress these has to be an other – someone beyond the boundary of oneself – who provides that affective touch. Understanding touch in this way will help us understand the empirical evidence of forms of touch that are intrinsically affective (see for example McGlone et al. 2007).

In summary, through using touch as a mode of perception, the infant can perceive the “other” and her own body at the same time. Now, the really interesting part of this story comes when we consider the first external object that the infant perceives through touch. This first external object is the same in all primates: the mother, for most monkeys and apes, and caregivers for human infants. When an infant experiences touch with his/her caregiver in different contexts, the infant will experience the caregiver’s reaction to the world, providing him/her with information about the external world, and more importantly, the infant will perceive all of this in relation to his/her own reactions to the caregiver’s reactions.

Consider the following example: a mother is walking in a dangerous area carrying a baby close to her chest. She sees a stranger approaching, and she feels frightened. The infant, who perceives the mother’s tensing muscles as a response, becomes agitated. The mother realizes the stranger is a policeman, and she relaxes; she feels the infant’s agitation and caresses the infant’s head; the infant calms down. Without gaze, the infant in this example was able to perceive through direct contact her/his mother reacting to the world, her/his own reactions to her/his mother’s reactions, and then modify her/his reactions based on another kind of touch. Through touch, the infant is able to acquire different perspectives and their relation to the world.

In my next post I will explore how touch, as the mode of interaction between caregiver and infant, becomes the ontogenetic precursor of social communication.