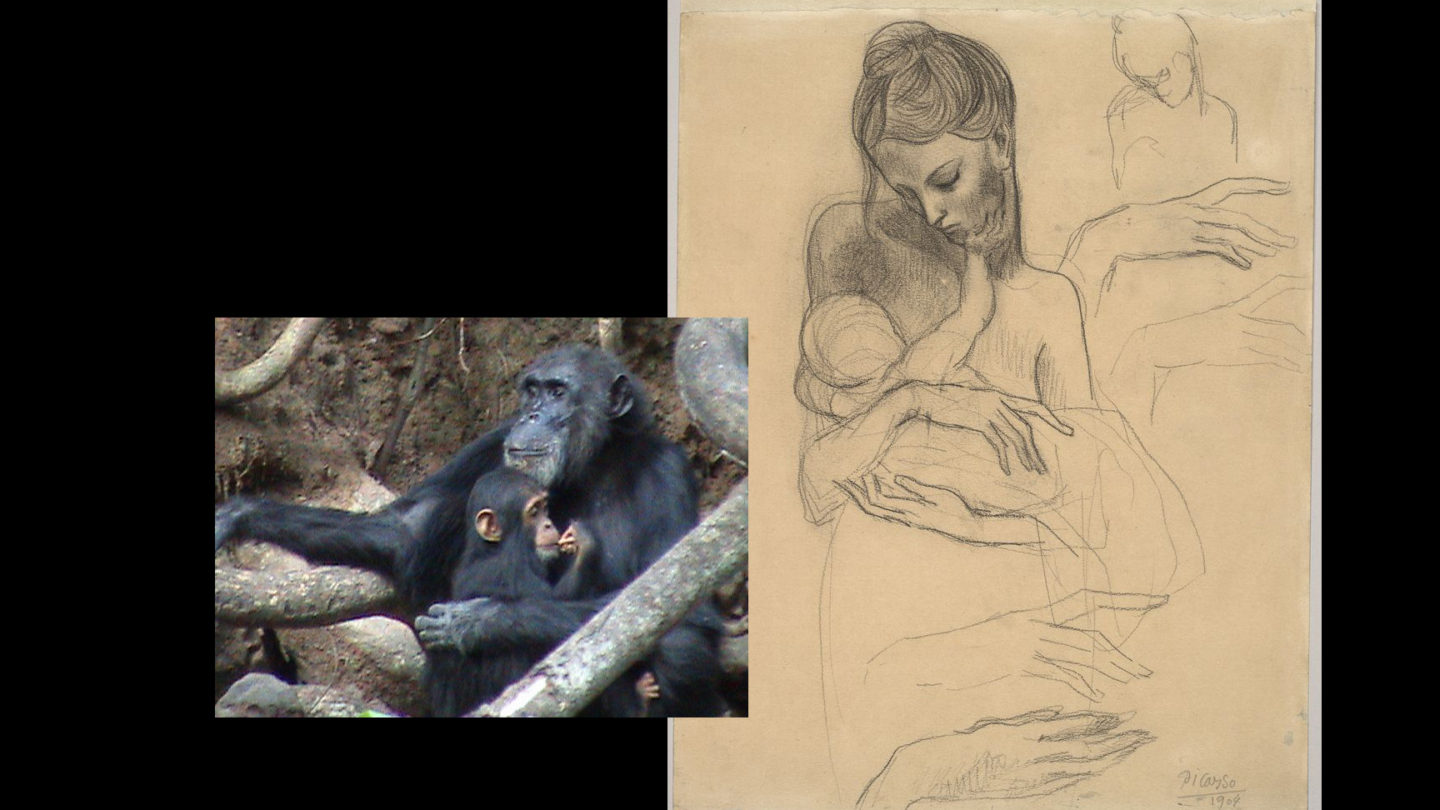 When orphans who have had to overcome difficult upbringings are portrayed in movies or books, they are usually described as smart, sensible children who are capable of facing any challenge and are able to intuitively excel in anything they attempt (even quidditch). The reality of a harsh upbringing, especially for infants who lack affiliative touch, is very different. One of the more extreme examples of this effect could be observed in 1990, after the fall of the Ceauşescu regime. It was found that children in orphanages were housed with minimal levels of food, clothing, heat, and caregiving interaction. Several studies found difficulties in the children’s attachment patterns and delays in cognitive and social functioning (see for example Fisher, Ames, Chisholm, & Savoie, 1997). The same can be said of chimpanzees. As part of my larger research project I observed two orphan chimpanzees. I found that the absence of the mother, even in later stages of infancy, has profound effects in the infant’s social behavior and levels of anxiety (Botero et al., 2013).

Going back to the original questions posed in the first post, we see that Tomasello (2014), in a search for the elements that characterize continuity and human uniqueness in the evolution of cognition, argued that true cooperation is a unique human feature. He argues that when humans act together, they coordinate by attending together to situations that are relevant to their goals. What I would like focus in this post is that if a primate is stressed or anxious, she cannot attend to her environment and cooperation and JA, among other social abilities, cannot be possible.

The link between gaze and being calm has been argued by others. Van Hecke and Mundyn (2007) argue that gaze-following provides a unique measure for attention regulation skills in infancy and that these are the building blocks for future regulation of social behaviors. I argue that touch, in particular, the caregiver touch with its calming effect, also provides the infant with this ability of being calm enough to pay attention to the world and engage in social interactions.

To argue this point let me remind you that since the early stages of primatology, it has been argued that the absence of the mother has an effect on the cognitive abilities of chimpanzees. Robert Yerkes (1943) warned researchers that isolation would make the subject unable to perform the tasks requested in an experiment. There are several examples of standard care used nursery setting is responsible for poor cognitive outcomes in chimpanzees (e.g., van Ijzendoor et al., 2009; Hopkins & Taglialatela, 2012).

There are many elements involved in the mother-infant interaction. However, touch, in particular the affiliative touch provided by the caregiver, seems to be one of the crucial elements in apes, monkeys and humans. Its soothing effect is so powerful that it may be used to overcome psychological or physically stressful conditions. For example, in Harlow’s early studies was clear that primates, and in particular infants, had a preference for “touch” in the form of a “cloth-mother” (Harlow & Zimmerman, 1959). Mason and Berkson (1962) showed that chimpanzee infants emitted fewer stress vocalizations when held by humans during the application of electric shocks than when left alone in a table.

It has been shown that touch has many advantages for the health of human infants. Studies have shown that maternal touch has an effect on the infant’s levels of comfort, learning, exploration, attachment and on the amount of crying or fussing (for a review on the effects of touch for well-being see Field, 2011). The effects of touch have also been observed in cross-cultural studies. NBAS scores of Asian and Native-American babies reveal that they are less irritable than Caucasian mothers; mothers in Asian and Native-American cultures often encourage their babies calm dispositions through swaddling, close physical contact, and nursing at the first sign of discomfort (Chisholm, 1989; Freedman & Freedman, 1969; Murett-Wagstaff & Moore, 1989).

Contact and massage of a baby is a common and ancient tradition in different cultures (e.g., Tronick, Winn & Morelli, 1990). This tradition is commonly found in places where mother and infant are exposed to stressful factors such as poor dietary and sanitary conditions and seems to help the infant overcome these conditions. For example, infants in the city of Malpe who belong to families of impoverished fisherman of low caste are exposed to the traditional “Indian Bath,” a bath that offers tactile stimulation. Despite the socio-economic conditions, these infants exhibit rapid weight gain and rapid motor development, when compared with American children (Landers, 1990). Maternal care that includes touch (i.e. carrying the baby all day) has even changed poor NBAS scores of undernourished infants in Zambia (Brazelton, Koslowski & Tronick, 1976); in this example touch changed unresponsive newborns into alert, contended 1-week olds.

Moreover, some have argued that touch is even more effective than gaze for a soothing effect. One of the paradigmatic studies of gaze in caregiver-infant interaction is the still-face paradigm (Tronick et al., 1978) where mothers, when interacting with their infants, exhibit an expressionless face. Infants respond to this lack of expression with signs of stress such as fussing, crying and grimacing. However, Stack and Muir (1992) found that if the mothers touched the infants during the still-face, the infants did less fussing, crying and grimacing and maintained the levels of smiling and playing as in normal play. Further, it is interesting to notice that even though some have argued that gaze has a calming effect, it is frequently the case that when an infant is over-stimulated or experiencing stressful events, s/he avoids gaze.

What the previous studies show is that, without the mother’s touch, social interactions (including collaborative actions) become difficult later in life and there will be limited cognitive development. For those reasons touch seems to be a characteristic that is present in both humans and apes and that may provide an explanation of a more gradual evolution of joint attention and collaborative abilities. In other words, chimpanzee mothers are not active teachers, they do not share their food or tools with their infants. They do not gaze as actively and at length as some human caregivers. However, they do touch their infants. Being with their mothers, infants are relaxed, secure enough to explore the environment and try the discarded foods or seeds that the mothers leave behind and to engage with other members of the group when the group is feeding. Focusing on touch will allow us to understand what apes and humans share that at the same time allowed humans to be able to engage in truly collaborative behaviors.

As a brief side note before I move to my concluding remarks, I find it interesting that these ideas occurred to me during my field work. This makes me wonder about the differences in approach when one faces chimpanzees in the wild as opposed to chimpanzees observed in captivity. In particular this makes me wonder about the influence that environmental settings have on observations of social cognition. In the wild I had the opportunity to see chimpanzees interact in an environment where, first, most chimpanzees are raised with their extended families and, second, at least in Gombe, group composition varies depending on the season (dry or rainy) and the availability of food. These elements, playing fundamental roles in social exchanges, are difficult if not impossible to replicate in captivity; however, most of the studies we use to determine what is unique in humans and what is unique in apes come from observing chimpanzees in captivity. As part of my current research I am exploring the implications of these differences for our understanding of ape and human minds.

In my first post I argued that gaze alone is no guarantee of JA. I argued for an alternative mode of perception, touch, as a way of providing a more encompassing definition of JA, one that includes modes of interaction found across diverse human cultures and across species, that is, humans and apes. Ironically, my approach to JA was inspired by Bruner’s perspective on what prompted the design of his seminal experiment that became the paradigm of using gaze to measure JA. He argues that what is particularly striking in JA is that “once one observes infants focusing their attention on virtually anything in the presence of an ‘other,’ one is struck by how social or sharing or reciprocal such attentional activity is” (2014, p.2). Considering all the examples we have reviewed in this series of posts, it is evident that JA goes beyond knowing that others have goals and perceptions. JA is enabled by the ability of the infant/child to understand his/her own perceptions and another organism’s perceptions and to have the desire to engage in a shared-social behavior. I argue that these capacities can be developed through touch as the non-distal mode of interaction between infants and caregivers. Caregiver-affilitive touch opens the doors of perception for an infant, allowing him/her to be calm enough to understand others, him/herself and the world.

Tronick, E., Brazelton, T. B. and Als, H. 1978: The structure of face-to-face interaction and its developmental functions. Sign Language Studies, (1), 1.