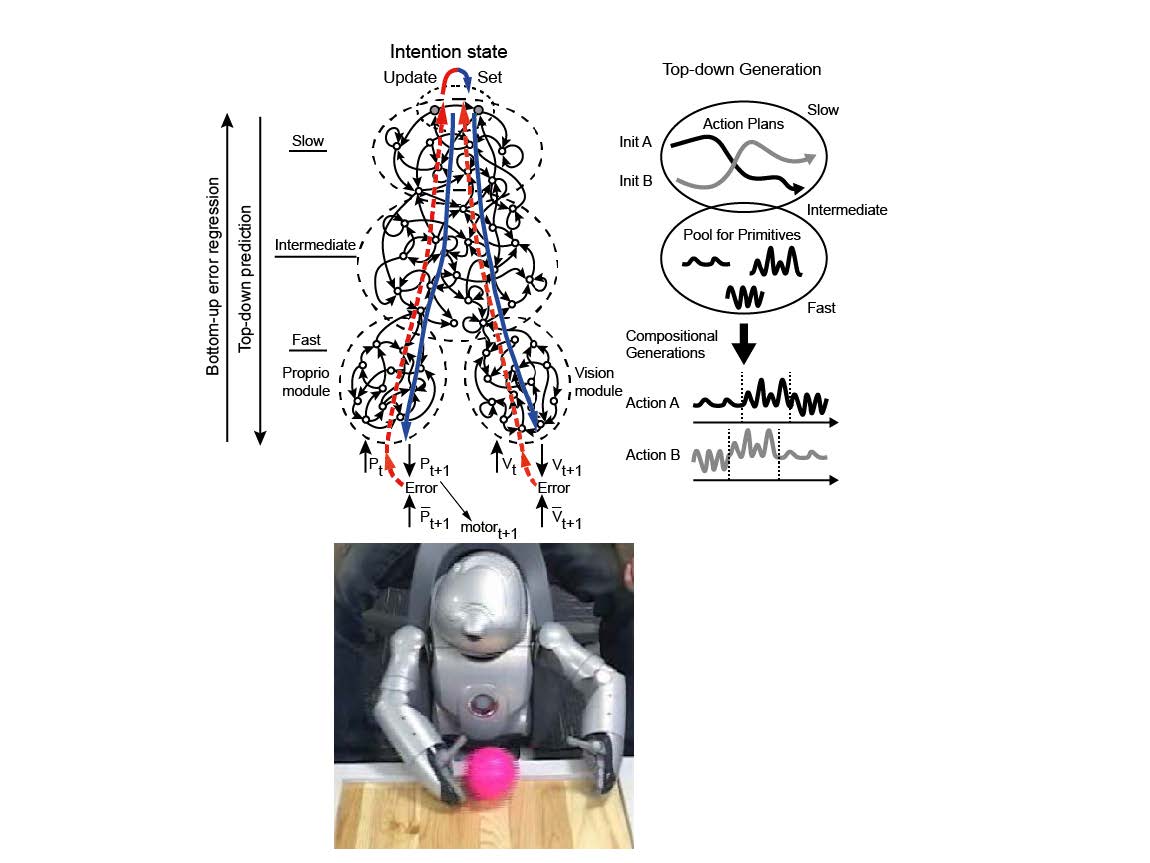 What does it take to be a creature that has some sense of itself as a material being, with its own concerns, encountering a structured and meaningful world? Such a being feels (from the inside, as it were) like a sensing, feeling, knowing thing, and a locus of ‘mattering’. In Surfing Uncertainty I describe (see previous posts) an emerging bundle of research programs in cognitive and computational neuroscience that – and I say this with all due caution, and a full measure of dread and trepidation – may begin to suggest a clue. I don’t think the clue replaces or challenges the other clues emerging in contemporary neuroscience. But it may be another step along the road.

To creep up on this, we need to add one final piece to the jigsaw of the predictive brain. That piece is the variable weighting of the prediction error signal. To get the flavor, consider the familiar (but actually rather surprising) ability of most humans to, on demand, see faces in the clouds. To replicate this, a multi-level prediction machine reduces the weighting on a select subset of ‘bottom-up’ sensory prediction errors. This is equivalent to increasing the weighting on your own top-down predictions (here, predictions of seeing face-like forms). By thus varying the balance between top-down prediction and the incoming sensory signal, you are enabled to ‘see’ face-forms despite the lack of precise face-information in the input stream.

This mechanism (the so-called ‘precision-weighting’ of prediction error) provides a flexible means to vary the balance between top-down prediction and incoming sensory evidence, at every level of the processing regime. Implemented by multiple means in the brain (such as slow dopaminergic modulation, and faster time-locked synchronies between neuronal populations) flexible precision-weighting renders these architectures spectacularly fluid and context-responsive. Much of Surfing Uncertainty is devoted to this mechanism, and (as previously mentioned) it’s potential role in explaining a wide range of phenomena from ordinary perception in the presence of noise, to delusions, hallucinations, and the distinctive cognitive and experiential profiles of a variety of non-neurotypical (for example, autistic) agents.

Imagine next that you are the lucky bearer of a predictive (precision-modulated) brain. Your whirring neural engines of behavior and response, if that vision is on track, are dedicated to nothing so much as the progressive reduction of salient (high-precision) forms of prediction error. To learn about the world, you learn to predict the changing plays of energy that bombard your sensory surfaces, and you lock onto worldly sources of patterns in those sensory stimulations (sources such as dogs, hurricanes, and the mental states of other agents) as a result. To move around the world you predict the plays of sensory (especially proprioceptive) stimulation that would result were you move thus and so, and reduce error with regard to those predictions by actually moving thus and so. And this rolling economy is constantly modulated by changing estimations of your own sensory uncertainty, as reflected in the changing precision-weighting of select prediction errors. You now exist as a kind of unified sensorimotor swirl, self-organizing so as constantly to reduce your own (high-precision) prediction errors. This is already a highly robotics-friendly vision. For the prediction task, running in an active embodied agent, installs a suite of knowledge that is firmly rooted in its own history of sensorimotor engagements, and that is thus especially apt for grounded sensorimotor control.

But what about sentience itself – that hard-to-pin-down feeling of stuff mattering and of truly ‘being in the world’? Here, recently-emerging work by Anil Seth and others highlights an under-appreciated feature of the total sensory stream that the agent is trying to predict. That feature is the the stream of interoceptive information specifying (via dense vascular feedback) the physiological state of the body – the state of the gut and viscera, blood sugar levels, temperature, and much much more (Bud Craig’s recent book How Do You Feel offers a wonderfully rich account of this).

What happens when a unified multi-level prediction engine crunches all that interoceptive information together with the information specifying organism-salient opportunities for action? Such an agent has a predictive grip on multi-scale structure in the external world. But that multi-layered grip is now superimposed upon (indeed, co-computed with) another multi-layered predictive grip – a grip on the changing physiological state of her own body. Agents like this are busy expecting themselves!

And these clearly interact. As your bodily states alter, the salience of various worldly opportunities alters too. Such estimations of salience are written deep into the heart of the predictive processing model, where they appear (as we just saw) as alterations to the weighting (the ‘precision’) of specific prediction error signals. As those estimations alter, you will act differently, harvesting different streams of exteroceptive and interoceptive information, that in turn determine subsequent actions, choices, and bodily states.

Your multi-layer action-generating predictive grip upon the world is now inflected, at every level, by an interoceptively informed grip on ‘how things are (physiologically) with you’. Might this be the moment at which a robot, animal, or machine starts to experience a low-grade sense of being-in-the-world? Such a system has, in some intuitive sense, a simple grip not just on the world, but on the world as it matters, right here, right now, for the embodied being that is you. Agents like that experience a structured and – dare I say it – meaningful world: a world where each perceptual moment presents salient affordances for action, permeated by a subtle sense of our own present and unfolding bodily states.

There is much that I’ve left out from these posts so far – most importantly, I haven’t said nearly enough about the crucial role of action and environmental structuring in altering the predictive tasks confronting the brain: changing what we need to predict, and when, in order to get things done. That’s where these stories stand to score further points by dovetailing neatly with further bodies of work in embodied, situated, and even ‘extended’ cognition. Nor have I addressed the impressive emerging bodies of work targeting multiple agents engaged in communal bouts of ‘social prediction’.

But rather than keep pushing my positive agenda, I propose to turn (in the next and final post) towards the dark side.

Thanks to Jun Tani for the header image. Watch for his book Exploring robotic minds: Actions, symbols, and consciousness as self-organizing dynamic phenomena, now in press with OUP.