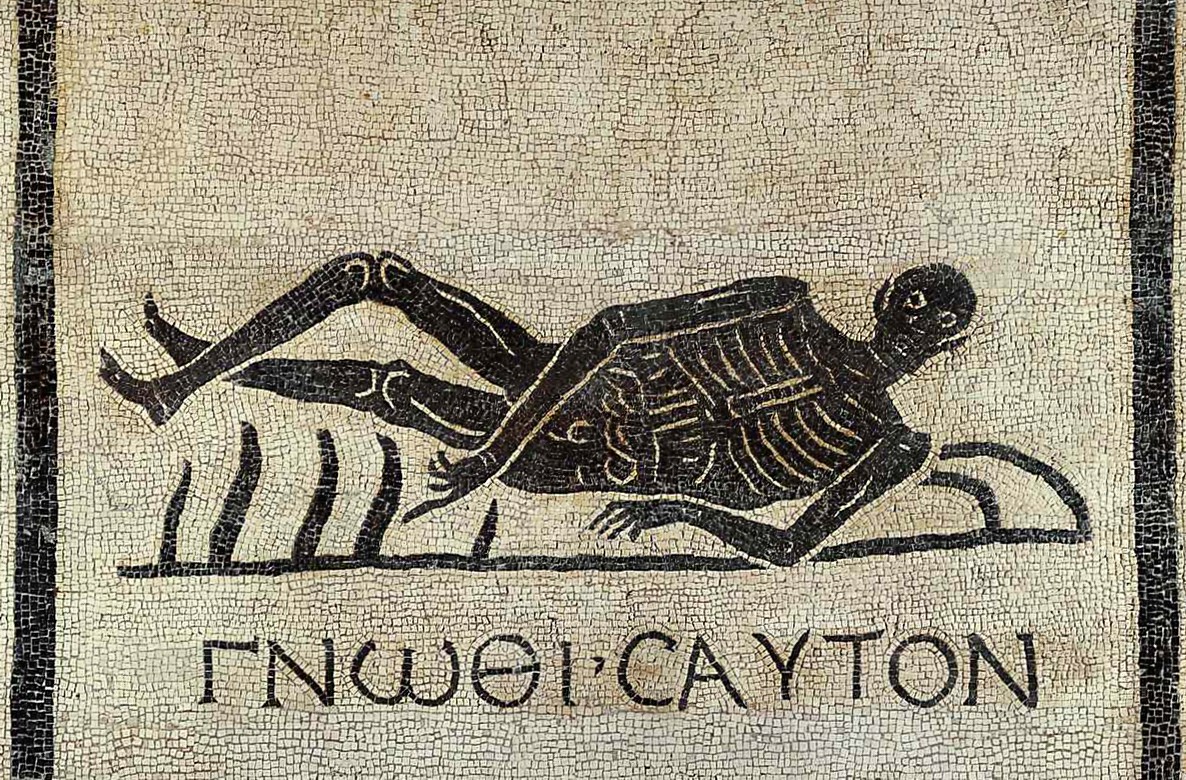 “Know thyself” is the dictum which appeared on the front of the temple in Delphi. But what does that mean and why is it important?

Centuries have gone past and one important addition to that Delphic injunction has come from the discovery of the unconscious. Again, it looks as if it is only by knowing our deep-seated feelings, desires, beliefs and intentions that we can actually improve our lives.

Thus, if you start approaching the issue from the Delphic injunction, there seems to be a certain distance between each subject and themselves. One’s character is not only what we manifest in acting and by living as we do, but it is also an object for each of us to study and make sense of, as if alien.

In fact, it consists of one’s dispositional mental states, let them be conscious or unconscious, which are the object of what, in The Varieties of Self-Knowledge, I call “third personal self-knowledge”. That is to say, in order to get knowledge of those mental states, we need to engage in quite complex epistemic procedures that have no guarantee of being successful. In fact, they are broadly akin to the ones we use to gain knowledge of other people’s minds. Yet, when successfully executed, these procedures give us substantial knowledge of ourselves. They give us knowledge that is sometimes difficult to attain and which is valuable because it discloses to us important truths about ourselves, on the basis of which we can eventually make decisions that can actually improve the quality of our lives.

Still, there is an important difference between the application of these epistemic procedures in one’s own case and in the case of other people. Namely, often times, in our own case and in our own case only, the prompts we have to start with are inner feelings and other occurrent mental states we are immediately aware of. That is, mental states we are aware of in a “first-personal” way.

On the other hand, if one looks at the purely philosophical literature on self-knowledge, which has developed in the last fifty years or so, one will be struck by quite the opposite phenomenon. Namely, an enormous amount of attention has been devoted to first-personal self-knowledge with very little work done on third-personal self-knowledge. Why so? Well, because of what I would call a kind of philosophical snobbery. Let me explain. Since at least Descartes, philosophers have been puzzled by the characteristic traits of first-personal self-knowledge. For our minds seem to be “transparent” to us. Whatever is occurring within them, it seems immediately evident to us. The painful or pleasurable sensations I am feeling right now are “self-intimating”. If I am feeling pain in my foot, I am immediately aware of it, and if I have the relevant concepts, I can immediately self-ascribe that sensation. Conversely, if I do so ascribe it, unless there are reasons to doubt of my sincerity or of being cognitively well-functioning, the self-ascription is guaranteed to be correct. We therefore appear to be “authoritative” with respect to our own mental states. Since, however, such knowledge is not independent of experience, nor is it based on an observation of our own mental states, through something like a mental eye, or on the observation of our own behavior and on the inference to its likely cause, we seem to be confronted with a serious epistemological problem. How does that knowledge come about and how can it exhibit those traits, which seem to set it apart from all other kinds of empirical knowledge we have—that is, transparency and authority? The difficulty of making sense of this epistemological problem has led many philosophers to discard third-personal self-knowledge as philosophically uninteresting, because they have always ultimately considered it just one more instance of knowledge based on inference to the best explanation.

Indeed, some contemporary theorists, like Richard Moran, have gone so far as to argue that it is only when we deliberate what to believe, desire and intend, based on weighing reasons, that we are actually capable of first-personal self-knowledge. While in all other cases—that is to say, in those cases where we gain knowledge of ourselves through third-personal means and, interestingly, also when we make self-ascriptions of occurrent sensations—we would not be operating in that mode and there wouldn’t be anything epistemologically distinctive.

Again, I do agree that there is something epistemologically puzzling about first-personal self-knowledge and that it is a phenomenon in need of philosophical explanation. Yet, third-personal self-knowledge too is epistemologically interesting, once one realizes the variety of methods by means of which it can come about, over and beyond inference to the best explanation. Moreover, while I do agree that there is definitely something distinctive about our knowledge of what I would call our “commissive propositional attitudes”, I do think that self-ascriptions of sensations are also a manifestation of first-personal self-knowledge, even though, as we will see, they do call for a subtly different account than the one we might want to give for our knowledge of our commissive propositional attitudes.