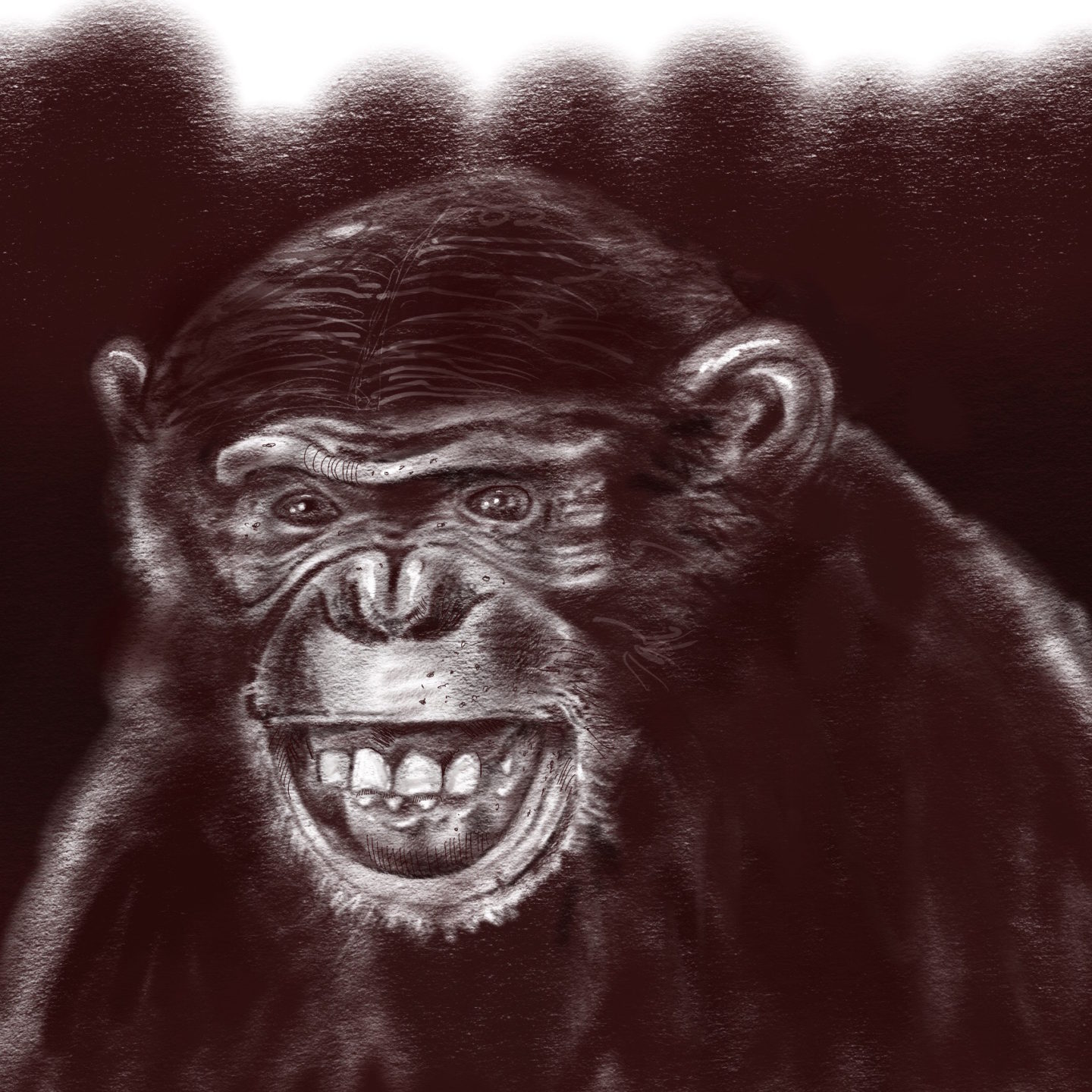 Our book seeks to describe the evolution of the mind from the ground up, and this requires us to explain complex problem solving without appeal to the semantic, syntactic, propositional, and representational capacities that emerge with language. Language is much too recent to serve as an accurate model of mind in the Pleistocene. A large part of our book is thus dedicated to articulating an affect-based bio-semantics, but we also take a run at pre-linguistic syntax or grammar.

The computational model of mind considers representations as information packets that insert into algorithms, like words into grammar, or zeros and ones into Boolean algebra functor sequences. Our contemporary minds can certainly do such information processing (and AI has been successful modeling along these lines), but we forget the fundamental “action” of the mind. As anthropologist Robert Barton suggests, we need to think of mind first and foremost as “internalized movement” not as a spectator or recorder of data bits.[1]

Our ability to coordinate our bodies into sophisticated action sequences, like rhythmic entrainment or tool use, stems in large part from the cerebellum. A dancer on the ancient savanna and a good jazz drummer today are sequencing motor patterns in a sophisticated manner, but the roots of motor sequencing evolution can be seen in our primate cousins.

The cerebellum grew even more rapidly in size and complexity than the neocortex. Primate cerebella, especially ours, are not just relatively larger than other mammals, but they are extremely dense in neural connections. In humans, the cerebellum has around 70 billion neurons, but we have only a vague understanding of their functions. Using a comparative study of monkeys and apes, Barton discovered that cerebellum evolution happened 6 times faster in apes than in other primates. Gorillas, chimpanzees, and humans had a rapid cerebellum expansion that might be uniquely important for explaining our unique mental and cultural advances.

The cerebellum is important in modeling, predicting and organizing behavioral sequences. It is crucial in correcting spatial and temporal relations, like those necessary in dance and tool use sequencing. It is also important in fine visual-motor dexterity –the kind that apes excel at when engaged in foraging and food preparation. Gorillas, for example, engage in complex food processing that turns painful stinging nettles into an important source of nutrition. Gorillas carefully strip the leaves off the stems and then gingerly fold them in a way that keeps the stingers from piercing their mouths as they eat. They also have similar seriatim steps for processing bamboo.

In the domain of foraging and food processing, apes are particularly good at building up complex sequences from subroutines, called “behavioral parsing.” Presumably early action chains of behavior would have been small, irreducible sequences that had to be performed in an exact order or the result would not be achieved. As memory and motor coordination became more robust the behavior sequences could extend out –by replication of subroutines. Decomposing larger routines into parts also creates the possibility of rearranging the sequences, not just repeating parts. Thus a kind of grammar begins to emerge. All the while, innovations of sequence must be edited by natural selection –if a novel routine fails to produce food, or shelter, or protection then it will fail the innovator and the troop mimics are unlikely to replicate the innovation.

In foraging, apes are too big and heavy to jump around on trees like monkeys, so they had to carefully plan and predict their pathways through their physical environments.[3] This meant there was selective pressure on embodied simulation –a cortico-cerebellar loop that gave apes better coordination of learned sequences and better predictive power about bodies in space and time.

Subtle changes in the ape brain increased sensory-motor task grammar, or action syntax abilities. Such bodily skill probably scaled up, in early humans, to help organize, predict and model social domains as well. Motor coordination of steps is prerequisite for tool use, and may be the beginning of a kind of gestural syntax system that could give rise to gestural communication and eventually language in humans. Recent studies of apes reveal that some of the seriatim food processing techniques, like gorilla nettle preparation, are culturally transmitted to members of the same band or troop.[4]

Most bodily motor sequencing may be simple stimulus and response, but it can also be decoupled from immediate stimuli. Its status, as decoupled, is unclear but sequences must “reside” in the loop of muscle memory, ecological trigger, and affective intentionality. We might think of these motor sequences as “premodern concepts” because they are not linguistically grounded, but they have the potential for organizing kinds of experience. Procedural memory, for example, is a form of implicit (often unconscious) memory that consolidates motor responses in long-term memory. The potential complexity of such sequencing is attested to by the way musicians and dancers store and recall elaborate patterns (most of which entered the system via rote routines). An embodied task grammar that allows for manipulation of such premodern concepts provides a mechanism for increased tool use, and gestural communication.

In addition to thinking with our bodies, we also think with images. Psychologist Lawrence Barsalou has argued that images are forms of thinking, too.[5] Cognitive activity, according to Barsalou, is a kind of simulation of external reality, via perceptual rather than code systems of representation. That is, affordances and AORs are embedded in percepts and cognitive maps.[6] When we have a visual experience of a dog, for example, the brain extracts an image symbol from the perceptual experience. The specific details of a German Shepherd, for example, are abstracted out of the image symbol –and we retain a morphological or shape simulation of the Shepherd, without the specific color and so on (powers of selective attention are enough to create attenuated symbols from the data). This more generic symbol of dog is not a transduction of the image properties into code properties. Rather, the structure of the percept is simulated in the symbol that is stored in the brain. The symbol recreates or maps the relations of the parts as it captures (imperfectly) the whole entity. In other words, the legs of the dog are ventral, and the head is anterior, while the tail is posterior, and so on. These image symbols, derived from the visual system, are then stored in long-term memory to function as concepts. The generic symbol of dog now acts as a prototype concept that helps us to organize other experiences. For example, comparing a new creature we’ve encountered to the extracted and symbolic dog prototype, leads us to identify it as a member of a generic (type) category. Moreover, the symbol prototype of dog gives us inferential abilities regarding features or properties of the creature that may or may not be visible in the moment (e.g., I can’t see the lower half of this creature, but since its head matches the dog prototype, I can infer some sense of its leg structure and function). This is all unconscious processing, for the most part, and we are not aware that our mind is forming these image concepts, though there is also significant conscious thinking with images, like Venn diagrams. Here we see a modern manifestation of a much older way of thinking about class membership as physical containment.

There may be good evolutionary reasons why humans can form generic mental images. In a constantly changing environment (like the one our ancestors evolved in), it does no good to store very precise visual memories that fail (by their specificity) to map onto the diverse problems of life. Generating an abstract prototype out of specific perceptions would be more adaptive because it would be more capacious for the taxonomic work and more fruitful for the predictive work of a mind trying to limn nature. An image-cognition system is imperfect and sometimes crude, but it is serviceable.

The upshot of all this is that mental images and artistic images are not simply recordings. Rather, they are modes of human appraisal. They are early forms of judgment. This model of knowledge appears controversial because many philosophers, from Aristotle to Wilfrid Sellars, claimed that only propositional language enables the thinker to subsume individuals (e.g., Englebert) under universals (e.g., Homo sapiens), as well as attribute properties (is hungry), and draw inferences (is now seeking food). On this model, knowledge is declarative. But another way of thinking about knowledge emphasizes its imaginative core. We are suggesting that a person who simulates a thing to a high degree of detail (either with body gesture, or drawing, or mimicry) can be said to have substantial knowledge of it.

In the next post, we discuss decoupling as an early element of representational mind.