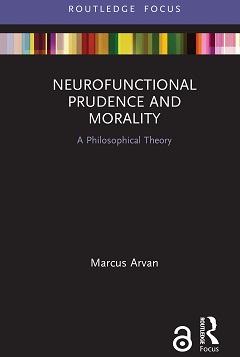 I am excited to report that my new book, Neurofunctional Prudence and Morality: A Philosophical Theory, is now available from Routledge ($70 hardback, $12.50+ ebook). Anyone interested can preview the book’s introduction and part of Chapter 1 here at Google Books. Interested readers can also download a pre-published draft of Chapter 2 (‘Outline of a Theory of Prudence’) at my website here, and read Chapter 3 open access (‘Derivation of Morality from Prudence’) here.

Introduction: Philosophers have long theorized about the relationship between morality and prudential self-interest. Many argue that moral actions are always or usually prudent, and that morality may even be reducible to prudence. However, others argue that moral actions are not necessarily prudent, or that prudence and morality involve fundamentally different types of normative reasons. This chapter outlines how these disagreements reveal the limitations of traditional philosophical methods. It then provides an overview of the new approach this book defends. It explains how this book combines traditional philosophical methods with behavioral neuroscience and scientific principles of theory selection to defend a new unified theory of prudence and morality. It also outlines how the book’s theory is simultaneously normative and descriptive, providing an account of how prudent and moral agents ought to act, along with testable predictions regarding how prudential and moral cognition actually function. Finally, it explains how this book’s theory refines and defends my earlier theory of morality, Rightness as Fairness, from a variety of objections in the literature.

Chapter 1 – Outline of the Behavioral Neuroscience of Prudence and Morality: This chapter outlines the emerging behavioral neuroscience of prudence and morality, explaining how the findings raise normative and descriptive explanatory questions. It begins by detailing how prudential and moral cognition involve mental time-travel (the capacity to imaginatively simulate different possible pasts and futures), other-perspective-taking (the capacity to imaginatively simulate other people’s perspectives), and risk-aversion. It then discusses 17 distinct regions of the human brain’s default mode network (DMN)—a region involved in daydreaming, mind-wandering, thinking about oneself and others, remembering the past, and imagining the future—that have been implicated in moral judgment and sensitivity across a wide variety of tasks. It also outlines how stimulation and inhibition of particular DMN regions and capacities, including the temporoparietal junction, have been found to have bidirectional effects on prudential and moral cognition and performance. Finally, it suggests the findings outlined raise normative questions about why particular brain regions and capacities should be involved in prudential and moral cognition, and descriptive questions about how they are involved in both forms of cognition, and how the findings summarized appear to cohere poorly with some dominant views in moral philosophy.

Chapter 2 – Outline of a Theory of Prudence: This chapter outlines a new normative theory of prudence and descriptive psychological theory of prudential cognition. It begins from the common premise in the literature that prudence is normatively a matter of acting in ways that have the greatest-expected aggregate lifetime utility. It then contends that because life as a whole is profoundly uncertain, prudence requires acting on principles that are rational from a standpoint of radical diachronic uncertainty—from what Donald Bruckner calls a ‘Prudential Original Position’, a model similar to John Rawls’s famous original position, but where an individual agent is situated behind a veil of ignorance applied to their own life. Following Bruckner, I assume that minimax regret—the principle of acting in ways that minimize the maximum amount of regret an action might result in—is the most rational principle in the Prudential Original Position, and that this principle converges with maximizing expected aggregate lifetime utility the more an agent cares about the past and future. The chapter then constructs a detailed theory of how Bruckner’s account coheres with and appears supported by a specific form of ‘moral risk-aversion’ that prudent people typically engage in and progressively internalize across childhood, adolescence, and adulthood.

Chapter 3 – Derivation of Morality from Prudence: This chapter derives and refines a novel normative moral theory and descriptive theory of moral psychology—Rightness as Fairness—from the theory of prudence defended in Chapter 2. It briefly summarizes Chapter 2’s finding that prudent agents typically internalize ‘moral risk-aversion’. It then outlines how this prudential psychology leads prudent agents to want to know how to act in ways they will not regret in morally salient cases, as well as to regard moral actions as the only types of actions that satisfy this prudential interest. It then uses these findings to defend a new derivation of my (2016) theory of morality, Rightness as Fairness, showing how the derivation successfully defends Rightness as Fairness against a variety of objections. The chapter also details how this book’s theory helps to substantiate the claim that Rightness as Fairness unifies a variety of competing moral frameworks: deontology, consequentialism, contractualism, and virtue ethics. Finally, the chapter shows how Chapter 2’s theory of prudence entails some revisions to Rightness as Fairness, including the adoption of a series of Rawlsian original positions to settle moral and social-political issues under ideal and nonideal circumstances—thus entailing a unified normative and descriptive psychological framework for prudence, morality, and justice.

Chapter 5 – Replies to Potential Concerns, and Avenues for Future Research: This chapter responds to potential concerns about this book’s theory of prudence and morality. It first addresses the concern that the theory is overly speculative, arguing that the theory is normatively and descriptively promising and thus worthy of further philosophical and empirical examination. Next, it responds to the concern that the theory commits the naturalistic fallacy and violates the ‘is-ought gap’, arguing that the theory commits neither error. It then addresses the concern that there may be counterexamples to this book’s theory of prudence: individuals who appear to live in prudentially successful ways while not appearing to have internalized the form of ‘moral-risk aversion’ that Chapters 2 and 3 argued serve as the foundation for normative moral philosophy and descriptive moral psychology. The chapter argues that it is ultimately an empirical question whether such counterexamples are genuine and, by extension, whether there really are individuals to whom morality does not normatively apply—implications the chapter argues for taking seriously. Finally, it addresses the concern that my theory is at most a theory of how morality is prudent, not a theory of morality per se.