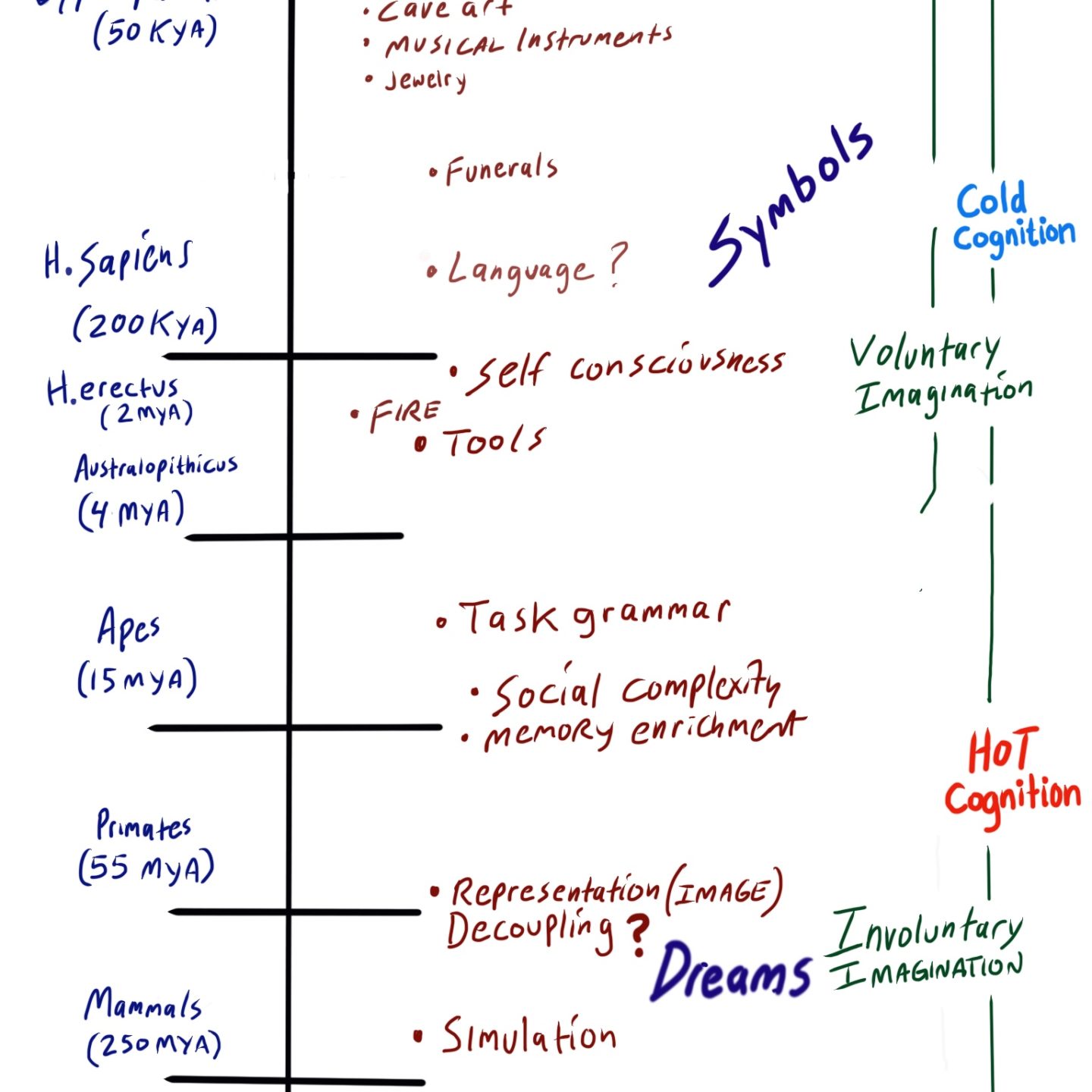 The decoupling of semantic content from immediate experience, such that it can be recalled, manipulated, and projected into the future, is due to several evolutionary trajectories. Cultural changes in pre-sapiens social life (e.g., longer and safer childhoods), better storage, recall, and recursion of embodied action-loops (facilitated by the cortico-cerebellar system[1]), better executive control over default associational systems, vastly improved episodic memory,[2] intensified social learning and then teaching,[3] to name a few of the trajectories.

When these routes come together and produce a viable natural language (probably in the Lower or Middle Paleolithic era) we arrive at the unique linguistic aspects of human mind. We have been arguing that this is a slow decoupling of the indicative functions from the older imperative functions of verbal behavior. The primate mind of action-oriented and pushmi-pullyu representations receives a new layer of delayed-action-orientated and then reflection-oriented representations. What are some of the defining properties of this top layer of indicative linguistic meaning?

Analytic philosophy, in the days of positivism, searched to find the smallest unit of meaning, the supposed element of signification. Many problems arose with the positivist attempt to tether every elemental word to a discrete sense datum, including the problem of meaningful non-observables (e.g., quantum level entities, causation, etc.) and meaningful language use by sensory impaired speakers (e.g., blind people use “blue” meaningfully without sense-data correspondence). The subsequent holist movement noticed that any given element, like a word or phrase, takes its meaning from the whole language or at least some connection to other terms, statements, and/or contexts.[4]

Hilary Putnam (1975) provides us with a helpful vector for thinking about linguistic meaning. The meaning of a term like “water” can be found in its “(1) syntactic markers; (2) semantic markers; (3) a description of the additional features of the stereotype; (4) a description of the extension” (pg. 269). In other words, “water” is syntactically a noun, semantically a liquid stuff or thing, stereotypically a transparent, hydrating fluid that fills our bodies, streams, and oceans, etc., and extensionally it is the set or thing described by the chemical formula H2O.

Presumably, changes in the meanings of words are attributable to changes in the “stereotypes.” These are altered by the context of the specific linguistic community. Unfortunately, analytic philosophers have never been very interested in the evolution of language per se, and the relationship between the vector and real language development received little attention. Perhaps more disappointing, the analytic philosophy of language –even in its more holistic forms –has not sufficiently explored the affective or emotional content of such a vector, despite Wittgenstein’s dictum that “meaning is use.”

From our vantage point we can ask, what, if any, affective marking should be added to a Putnam style vector? We have already argued that affect and feeling generally play a great role in the semantic structure of many representations, just as it does in their affordance predecessors. So too, Putnam’s “stereotypes,” for terms as seemingly neutral as “water,” would also have a significant affective component. Depending on situated context, water, for example, also means: something I thirst for; something I cool with; something I cleanse with; something dangerous, and other imperative meanings. Analytic philosophy of language may continue to help us parse the complexities of contemporary linguistics, but it is relatively unhelpful in tracking the evolution of mind. Moreover, its traditionally disembodied approach has also failed to penetrate the adaptive functions of language. Affect is an important ingredient in the connotative and associational matrix that seems inadequately addressed in analytic approaches to language and concepts.

A successful theory of concepts will properly articulate the structural aspects of concepts (i.e., the relation of simple concepts to complex wholes, the relation of sense and referent, etc.), and also the functions of concepts (i.e., how they categorize and entail). Additionally, a full theory will explain how concepts are acquired (i.e., synthesized from isolated sensory experience, or analytically derived, or connotatively associated, or abstracted from simulations, etc.). We cannot resolve all of these questions here.[5]

It is our view that a given theory of concepts will win over its competitors in proportion to its ability (among other things) to incorporate affective precursors into conceptual structure. Each theory will eventually have to reconcile with an evolutionary account of affectively-encoded affordances. Our project here will only suggest the way forward for prototype concepts (and perceptual symbols), since the analog nature of such non-classical concepts makes their affective structure more obvious. Our preference for prototypes, perceptual symbols, and enactive schema, also results from the consilience of these pre-linguistic concepts with biology generally (i.e., animal minds).[6] We leave it to others to annex their preferred theory of concepts with the affective semantics we detail in our work.

In this section of our book, we critique the (dominant) philosophical tradition that pursues the propositional and indicative content of concepts and emotions. The extreme indicativists go so far as to suggest that propositional content is not only necessary for meaning, but also requisite for consciousness itself, while we argue that affect is the key ingredient for sentience.

We start with a brief tour of the entrenched propositional view of emotions. Next, we offer a clearer picture of how prototype concepts better interface with the more embodied forms of meaning that preceded our modern minds. And finally, we suggest a future research program into analogical thinking, as a pre-definitional and pre-propositional core of embodied cognition.

The book closes with two chapters about the tertiary level of cultural emotions and their functions within the social structures of civilization, this includes discussion of mythology, religion, art, and the domestication of emotion.

[3] A true teacher satisfies three criteria. First, the agent modifies its behavior in the presence of a naïve observer. Secondly, the agent incurs some cost to this behavioral adjustment, and thirdly, the naïve observer acquires the skill more rapidly than scenarios without the agent’s example. See “Is There Teaching in Nonhuman Animals?” T. M. Caro and M. D. Hauser The Quarterly Review of Biology Vol. 67, No. 2 (Jun., 1992), pp. 151-174

[5] We agree with Laurence and Margolis (1999) that most concepts are sub-propositional mental representations. But concepts should not be assumed to be essentially lexical (i.e., corresponding to natural language terms), nor should they be assumed to have definitional structure (i.e., having constitutive necessary and sufficient conditions).

Moreover, we are additionally swayed toward prototype concepts (and certain aspects of conceptual atomism) because definitional concepts (classical criteria models) lack psychological and phenomenological corroboration, and appear to be discounted in some empirical studies. For example, Walter Kintsch (1974) measured the time it took for subjects to process the meaning of simple versus complex concepts in sentence format. No processing lag was measured when subjects encountered concepts with greater definitional complexity. Complex concepts like “bachelor” or “convinced” (each containing definitional parts) were processed at the same speeds as those constituent parts. This may be because “definitions aren’t psychologically real: The reason definitions don’t affect processing is that they’re not there to have any effect.” (Laurence and Margolis, pg.18)