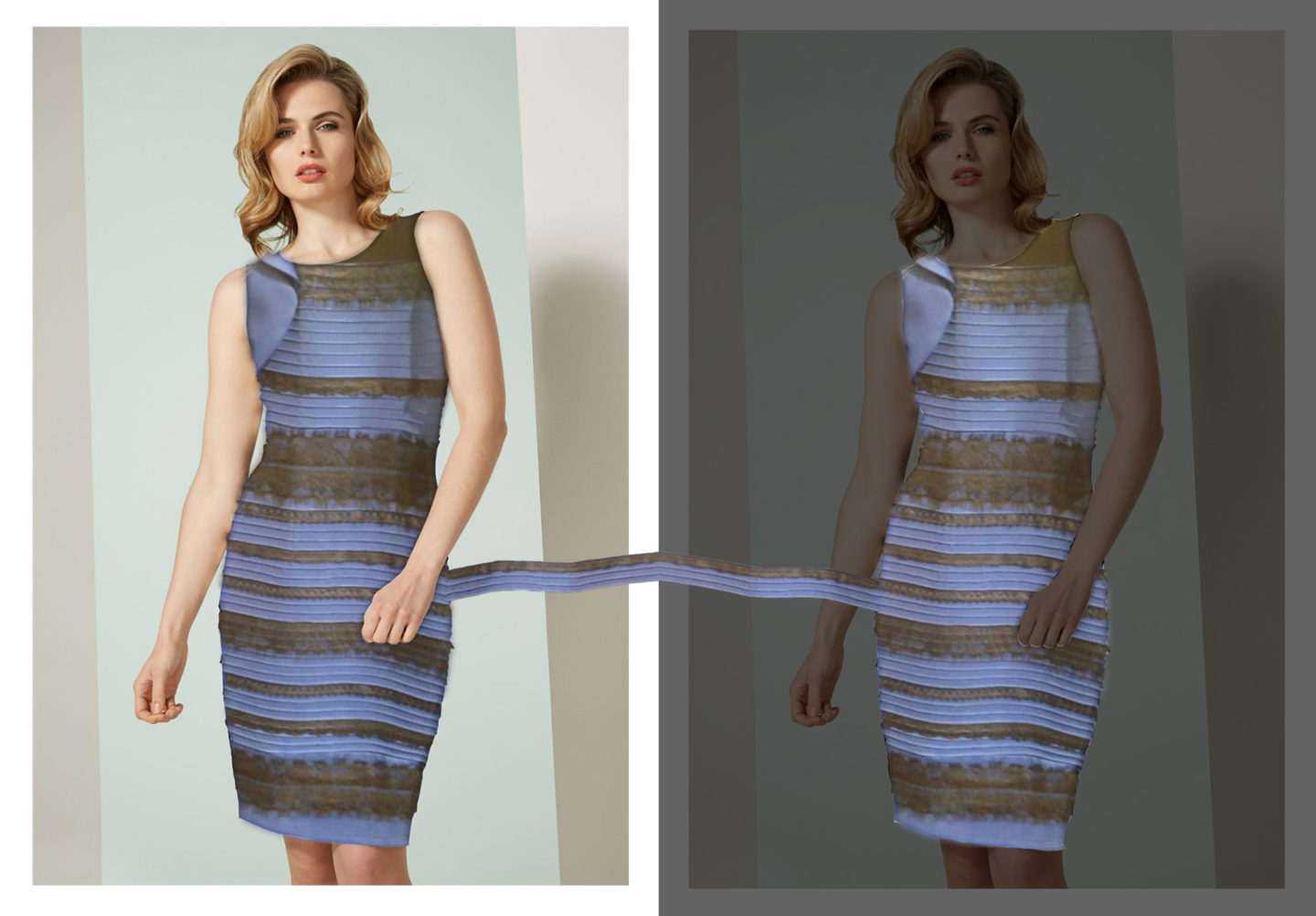 I expect everyone’s heartily tired now of the Dress … But I couldn’t stop thinking about it, and with an artist-designer friend in London, Hilary Brown, I started thinking of ways to illustrate what was going on. So here are a few images — note that all of them can be viewed in a larger size by clicking on the image shown.

The first (Fig. 1, right) shows the kind of thing I described in my first post: making the kind of strange colour-correction that the camera must have made, when it created the original Tumblr photo of the Dress. We’ve taken the publicity photo and transformed it (with the generous permission of Roman Originals) so the dress more or less matches the Dress in the Tumblr photo (detail in inset box, to left). The transformation of course shifts the colours towards yellow: if all you saw was the dress, you wouldn’t know any special colour-correction had happened (since, after all, dresses can be more or less any colour). But as soon as there are arms and legs and a face visible too, the visual system responds to the colour-adjustment (as when we see things in extremely yellow light) and imposes a kind of counter-adjustment: the result is that we see the dress basically as blue and black. Is this a matter of ‘inference’ and ‘judgement’? I think not: I’d say the dress on the model really looks a different colour from the dress in the inset. One might have to zoom in or mask out the outer part of the photo to check.

In the two pictures of Figure 2, the model is wearing the Dress that caused all the trouble — as in an identikit photo. (You can see Hilary’s tailoring to the jacket-material and adjustments to the neck and the waist-line. Thanks again to Roman Originals for permission to transform the image.) I’d say, in the lefthand image, the dress looks more or less blue and black (though a less deep blue than in the yellow-tinged Fig. 1) and in the righthand one it looks white and gold—thanks just to the darkening of the surrounding. They’re wonderful images that one could puzzle over for a long time.

Finally, in Figure 3 the colour-adjusted dress and two different lighting conditions of the second figure are combined into a single image: the model and her surroundings are shown as brightly illuminated in the bottom part of the image, and as darkened in the top half. Here, the appearance of the dress will vary depending on where you focus your attention, or if you use your hand or a piece of paper to cover up one or the other portion of the image.

How come the blue of the dress so easily comes to look pale? I think it is partly that the dress (in the world, so to speak) is actually rather reflective: so the blue shows highlights that can easily be read as light and shade. And light and shade (on what is evidently a single surface) are often a sign of white or pale colour. (On a matt black surface, shadows don’t show up at all, and there are no highlights.) The light-and-dark variation, which actually comes from specular reflection on the blue, easily gets read (particularly since a lot of colour-detail is lost in a phone-camera picture like this) as a sign of a white or pale surface.