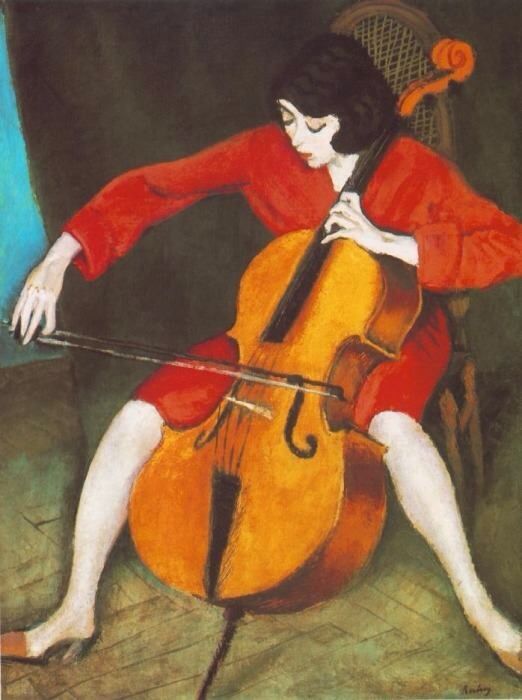 I want to pick up a thread from my second post, where I wrote that mindfulness practices should be understood as skillful ways of enacting certain kinds of embodied states and behaviors in the world, not as inner observation of an observer-independent mental stream. This point is especially important today, because the explosion of cognitive neuroscience research on mindfulness unfortunately often reinforces the mistaken idea that mindfulness is in the head.

A vivid illustration of this idea appeared in a recent Scientific American article. The article contained a figure, reproduced below, depicting “focused attention” meditation in terms of a dynamic cycle of cognitive processes and corresponding brain activities. In focused attention meditation, you keep your attention on a chosen object, such as the sensation of breathing, as a way of practicing staying centered in the present moment while being vigilant of distractions. The cognitive cycle comprises sustained attention, distraction and mind wandering, becoming aware of the distraction, reorienting your awareness and returning to sustained attention, more distraction and mind wandering, and so on. The figure depicts each kind of cognitive process as being tied to the activation of particular brain areas, understood as nodes of neural networks that are specific for particular cognitive activities: Mind-wandering is depicted as tied to activation of the default-mode network (the posterior cingulate cortex, the precuneus, and the posterior inferior parietal region); becoming aware of distraction is tied to activation of the salience network (the anterior insula and the anterior cingulate cortex); reorientation of awareness is tied to activation of the dorsolateral prefrontal cortex and the inferior parietal lobule; and sustaining focus is tied to activation of the dorsolateral prefrontal cortex. 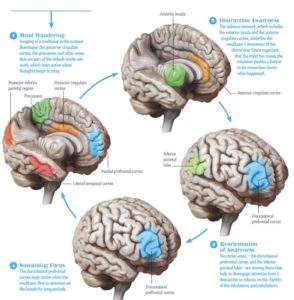 There are two problems with this way of thinking.

First, it’s unwarranted to map cognitive functions onto the brain in this way. In an examination of large databases of neuroimaging data, Michael Anderson and Luiz Pessoa have shown that there is no one-to-one correspondence between either particular brain regions or neural networks, especially as currently identified using fMRI, and particular cognitive functions. Rather, any given region or network can be activated across a wide array of tasks, depending on the context, and any given task can activate a variety of regions or networks.

In addition, as my UBC Philosophy colleague, Christopher Mole, has argued, just as there’s no place in the orchestra where unison resides, so there’s no place in the brain where attention resides. Attention is a mode in which multiple cognitive processes unfold in relation to each other, just as unison in an orchestra is a mode in which multiple musical processes unfold in relation to each other. In Mole’s terms, attention is “cognitive unison.” The idea is that performing a task draws on a variety of cognitive processes, which need to operate together in a coordinated, coherent, and sustained way. Attention isn’t any one of these particular processes, nor is it even some collection of them; rather, attention is the unison of their operation in the service of performing the task. Of course, if we look inside the brain, particular kinds of neural processes need to be happening, such as the biased competition between neural activities or the phase synchrony between neuronal oscillations. But these neural processes aren’t themselves attention; they are the facilitators of attention. Attention is the agent-level phenomenon of task-relevant cognitive processes operating in unison.

Let’s apply these ideas to focused attention meditation. This practice requires cognitive unison. You need to place and keep your body in a particular position in relation to your immediate environment, which often includes the social setting of other practitioners. You need to choose an object of attention, such as the felt sensation of breathing, from your field of experience. And you need to orchestrate your interoceptive awareness and your metacognitive processes so they operate in unison in order to keep your focus on that object and come back to it when you stray from it.

It follows from these considerations that mapping sustained attention onto a particular brain area, such as the dorsolateral prefrontal cortex, even as the node of a network, is a category mistake. In certain contexts, activation of that brain area facilitates attention, but it doesn’t generate or constitute attention. Attention, again, isn’t inside the brain; it’s a way in which the person (due, of course, in part to her brain) is engaged in a task.

Second, mindfulness practices consist in the integrated exercise of a host of cognitive, affective, and bodily skills in situated action, so it’s a conceptual mistake to superimpose mindfulness onto particular brain areas or networks.

Here’s an analogy. Being a good parent consists in a host of emotional and cognitive skills and putting those skills into play in action. The skills and the behaviors based on them clearly depend on the brain—and improving them changes the brain—but they aren’t private mental states and don’t exist inside the brain. Although it’s conceivable that unique patterns of brain activity correlate with being a good parent in a given context, appealing to their presence wouldn’t explain what it is to be a good parent. Parenting doesn’t exist inside the brain; it exists in the social world of human life. Furthermore, what counts as good parenting depends on the social context and the culture. So parenting simply isn’t visible at the level of the brain. To bring it into view we need a wider perspective, one that takes in the context of the whole person as well as the social and cultural environment.

The same points apply to mindfulness. Being mindful consists in certain emotional and cognitive skills and putting those skills into play in the social world. Take the classical Buddhist account of mindfulness as “bearing in mind” (sati in Pāli or smṛti in Sanskrit) or what I like to call “recollective attention.” This includes attentive awareness of your body, monitoring your thoughts and feelings, and continually remembering to do these things so that you can bring your mind back to them when it wanders away to something else. In cognitive science terms, exercising these mental skills requires being able to integrate awareness, attention, memory, and metacognition.

Now, these cognitive and emotional skills that constitute being mindful, as well as the behaviors based on them, clearly depend on the brain—and improving them changes the brain—but they aren’t private mental states and don’t exist inside the brain. Although it’s possible that unique patterns of brain activity correlate with being mindful in a given context, appealing to their presence wouldn’t explain what mindfulness is. Mindfulness doesn’t exist inside the brain; it exists in the social world of human life. Furthermore, what counts as being mindful depends on the social context and the culture. So mindfulness simply isn’t visible at the level of the brain. To bring it into view we need a wider perspective, one that takes in the context of the whole person as well as the social and cultural environment.

The last point I want to make is that, from an enactive perspective, mindfulness depends constitutively on social cognition. To illustrate what I mean, let’s look at this figure from a recent article called “Investigating the Phenomenological Matrix of Mindfulness-Related Practices from a Neurocognitive Perspective.” 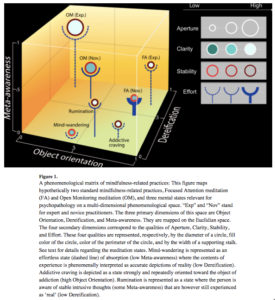 The authors map mindfulness practices and related cognitive states into a three-dimensional “phenomenological matrix” whose axes are “meta-awareness” (awareness of the current contents of experience), “object orientation” (directed and sustained mental attention), and “dereification” (the ability to view the contents of experience as mere mental contents). Notice that meta-awareness and dereification are metacognitive: they require being able to view your mental processes as mental processes. According to a number of theorists, this ability derives from internalizing social cognition: It requires that you internalize a perspective on your own mind that you acquire developmentally when you come to understand the possibility of there being an outside view of yourself through another person.

Les Vygotsky is a classic source for this idea. He proposed that all higher mental processes, involving metacognition, appear twice in development—first, socially, and second, internalized individually. Socially, a child participates with others in cultural practices and enacts shared forms of cognition. For example, in joint attention, the child and the caregiver understand each other as paying attention to the same thing (say, a toy). Eventually, the child comes to understand that she, too, can be an object of shared attention, and so she internalizes an outward perspective on herself. Coming to have such an outside perspective from within is crucial for metacognition.

Michael Tomasello builds on this idea. He argues that voluntary mental attention and metacognition are internalized forms of social cognition, dependent on being able to share intentions with others, imitate others, and share attention with others.

Merlin Donald’s version of these ideas is especially congenial to the enactive approach. He focuses on the environment of symbolic culture and argues that the human brain is a cultural brain: It’s adapted to symbolic culture, and can’t develop and function properly as a cognitive organ unless it’s embedded in a cultural environment. Donald proposes that biological memory systems and symbolic memory systems (writing, computers) make up an extended, hybrid cognitive system. Human memory extends beyond what’s contained inside the individual head. Cultural materials and processes are so densely intertwined with the brain’s development and functioning that they function as a necessary part of human cognition. Donald further argues that this culturally extended cognitive system makes possible an overall expansion of human conscious capacity, enabling voluntary mental attention and metacognition—precisely the mental capacities required for mindfulness practices.

The lesson I want to draw from these considerations is that when we practice the kind of mindful awareness that we highlighted in The Embodied Mind, we’re making use of social and cultural cognitive skills. The core metacognitive capacities that mindfulness practices put to work belong to the domain of social cognition. Therefore, to conceive of mindfulness meditation as a kind of private introspection is wrong. Mindfulness meditation isn’t the inner perception of an independent and pre-existent, private mental realm; it’s the metacognition—the internalized social cognition—of socially constituted experience.

In making this point, I don’t mean to imply—and it doesn’t logically follow—that everything pertaining to awareness or consciousness is socially constituted. My point is that metacognition is constitutively social and that it’s a core part of mindfulness. Even if it’s possible, as certain Buddhist meditative and philosophical systems maintain, to rest in “pure awareness” devoid of any subject-object structure, in which mindfulness is said to consist in “mere non-distraction,” the minute one thinks about or conceptualizes this experience (which, of course, has already happened in describing it this way), one is in the domain of metacognition and hence social life.