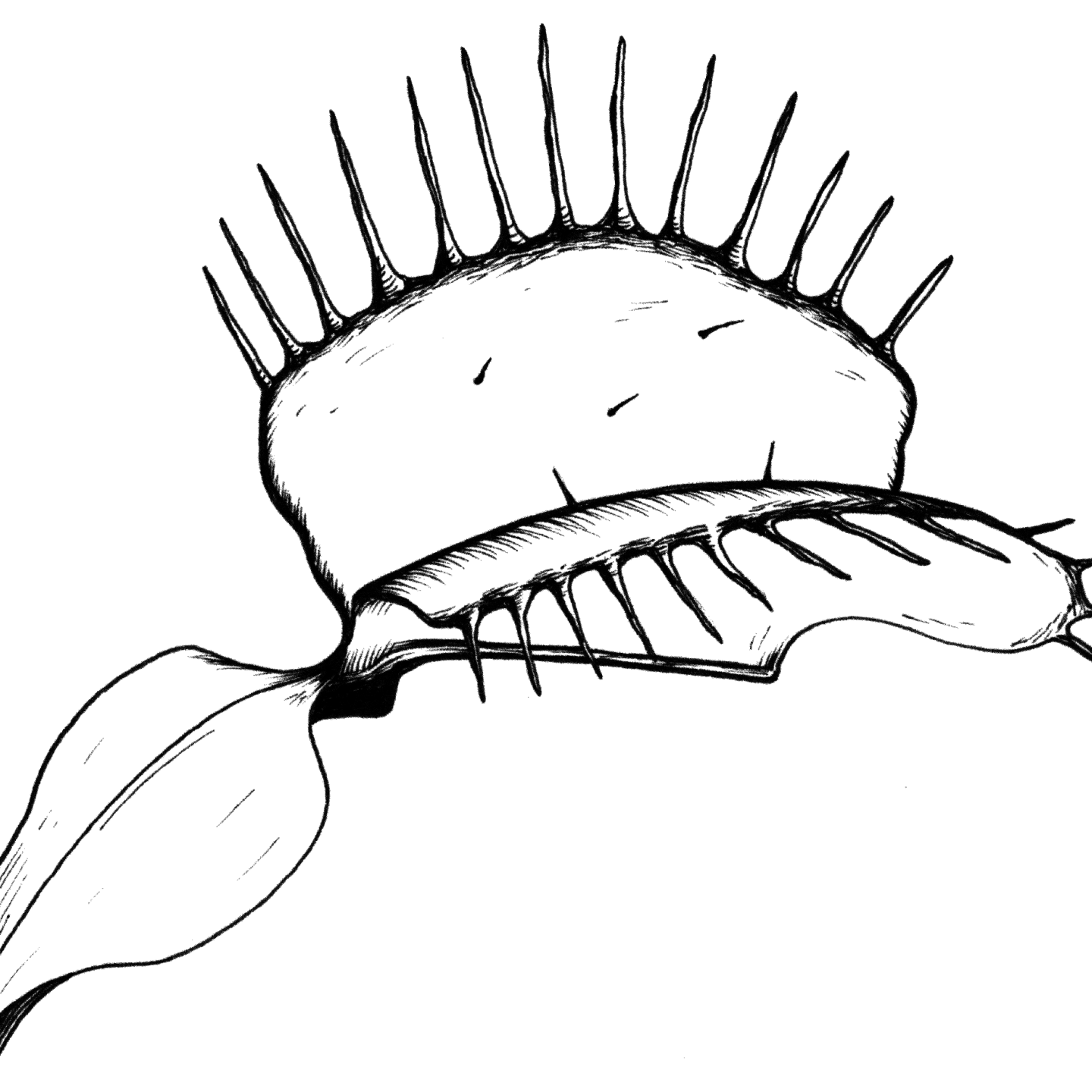 Plants eat animals—at least, some plants, and some animals. Well-known, but still fascinating, the trapping of the Venus flytrap is a case of thigmomorphism, a change of shape in response to touch. Since trapping is not affected by the direction of the stimulus, it is not a tropism, like phototropism or gravitropism. Instead, it is a nastic movement. Hence: thigmonasty. Unlike phototropism and gravitropism, trapping is reversible—it can be undone—and does not count as growth, which is typically irreversible. The trap shuts only when two of its hairs are touched, and the second must be touched within twenty seconds of the first. A plausible conjecture is that the trap uses two triggers because doing so helps avoid wasting energy closing and re-opening when there is nothing of nutritional value present, such as dead leaf debris. With two triggers the chances are better that there is something moving in the trap. By restricting the time in which the second hair can be touched, the chances may be better still. Otherwise, two pieces of dead leaf debris, landing many minutes apart, could get the trap to shut. As Daniel Chamowitz, and Paco Calvo and Fred Keijzer say, it seems the Venus flytrap remembers that one hair has recently been touched.

These facts can tempt us to say that plants remember.

Chamowitz says we should be careful. Psychologists commonly distinguish between three types of memory: episodic, procedural, and semantic. Chamowitz holds that plant behaviors like those mentioned above don’t fit those types well. Still, he adds, they do seem to involve the storage, encoding, and retrieval of information, which is the common structure of those three types of memory.

For instance, leaves of many plants twist towards light. This is phototorsion. As the sun moves across the sky, leaves turn with it, towards it. (On an average “leafy” tree, leaves generally don’t overlap, seeming to optimize the amount of leaf surface that is exposed to the sun, thus optimizing access to food.) As Calvo has pointed out, the neat thing, the memory-like thing, is that overnight, they turn back to where the sun will be in the morning! They seem to encode, store, and retrieve that information.

When the Sensitive Plant (also known as the Sleeping Plant and the Touch-Me-Not) is touched, the leaflets in the vicinity successively fold inward, in less than a second, about the speed of Venus’s trap. According to Monica Gagliano and her colleagues, the Sensitive Plant appears to habituate to touch. Its leaves cease to fold when repeatedly touched; it gets used to such stimulation. As the stimulation diminishes, the folding response resumes. One hypothesis: the plant stops responding because responding tends to be a waste of energy; there is no need to respond. If true, Sensitive Plants grown in circumstances in which mechanical perturbation does not correlate with any threat to the plant will habituate more quickly than plants grown in other circumstances. And that is indeed what Gagliano and her colleagues have found. (In more recent work, they claim to have evidence of associative learning in garden peas.)

Thus, it seems plausible that plants encode, store, and retrieve information. In that respect, it is reasonable to say they remember.

But what exactly is information? In my next post, I will begin to address that question by talking about representations, making the case for thinking that plants do not have minds.