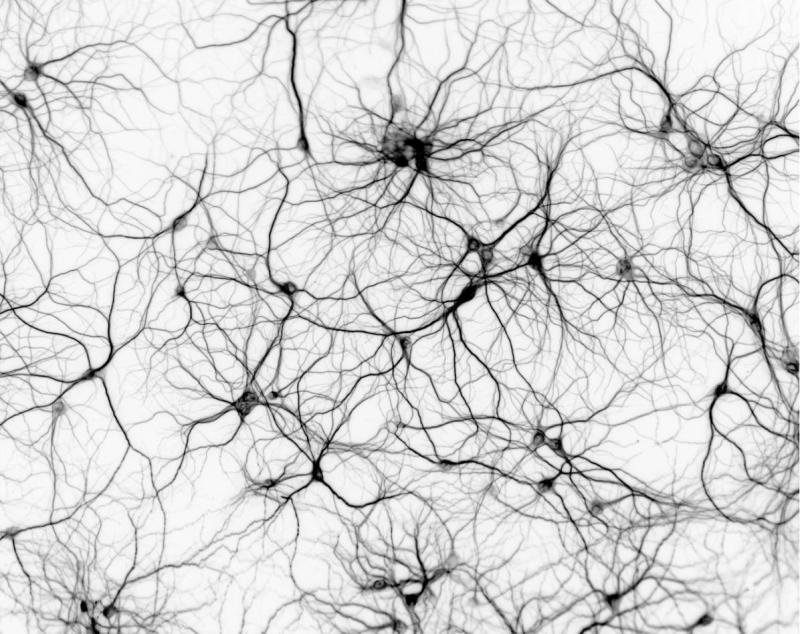 I’ll be posting summaries each month of high-quality, general-interest papers from the systems neuroscience literature (usually there are one to five such papers a month). I plan to post them in the middle of the following month (depending on what else is going on here at Brains).

This article provides an excellent overview of efference copy that is unique in its breadth. 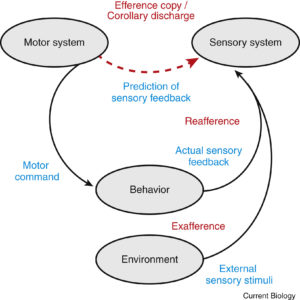 When brains send motor commands to the body to generate movements, these commands often have drastic auxiliary effects in the rest of the brain. These internally-directed motor signals are known in the literature either as efference copies or corollary discharge.

Most people are probably familiar with the effects of corollary discharge in the eye movement system. When you softly poke your eye, the visual scene will shift with a dramatic blur. However, if you generate an identical movement via a saccade, your visual world will remain relatively stable and you will not perceive any blur. This is because the brain uses the motor command (the eye movement signal) to counteract the predicted sensory consequences of the saccade. Such saccadic suppression helps us stay sensitive to those stimuli generated by external sources such as flies and lions.

FYI, in the literature, self-generated and externally generated sensory signals are known as reafferent and exafferent signals, respectively (see the accompanying Figure from the original paper).

I like this article because of the impressive breadth of up-to-date empirical examples they summarize from the literature.  While they discuss the classics like the eye movement system and mormyrid electrosensory system, they also cover the vestibular system, the crayfish escape response system, and many others.

They also go much further than the usual stories about how corollary discharge influences sensory systems, and stretch us to think about its effects in motor systems. What is nice here is that they do not rehash the usual story about forward models in motor control (as fine as that topic is). Rather, they provide a refreshing empirically-grounded discussion of how motor signals influence seemingly unrelated motor patterns.

For example, during swimming in the tadpole, movements of the head to the left are coupled to movements of the eyes to the right (and vice-versa). This has clear ethological import: it keeps images relatively stabilized on their retinae. Similarly, in a paper they did not discuss, Groh’s group recently showed that when you make a saccade to your left, this literally causes your eardrums to move inside your head in phase with the saccades (Gruters et al, 2018).

Note that the authors discuss the difference between ‘corollary discharge’ and ‘efference copy’, and do this to paint predictive motor signals in a new conceptual framework. I liked the article for other reasons. Most people use the two terms interchangeably, and I’m not convinced yet to do otherwise. Though as MacLeod said, “In general it is seldom clear that the classifications of different investigators are the same…most scientists would rather share another person’s toothbrush than adopt his terminology” (Macleod, 1978, p 632). I tend to be a lumper, not a splitter, but the splitters here may find this discussion helpful.

This paper is a significant step forward in our quest to use light to both manipulate, and monitor, patterns of activity in volumes of neuronal tissue.

For about a century, the only technique we had to manipulate neuronal activity on fine time scales was electrical stimulation. Unfortunately, such stimulation is completely nonselective: it will activate any old neuron near the stimulating electrode. This changed with the advent of optogenetics in the 2000s. Perhaps the most important technological advancement in neuroscience in the last 15 years, optogenetics lets us manipulate neuronal by shining light on neurons that have been genetically modified to become light-sensitive. For a review, see Fenno et al., 2011.

One problem with early optogenetics was that it wasn’t selective enough. Let’s say you express channelrhodopsin (a light-sensitive ion channel) in pyramidal cells of the cortex. If you turn on a blue light in an optic fiber in the cortex, it will stimulate all the pyramidal cells in its catch radius (Panel A, from Ronzitti et al., 2017).  What if we want to stimulate individual pyramidal cells? One solution is to split your light source into multiple parallel beams that can simultaneously stimulate multiple neurons of your choosing (Panel B, also from Ronzitti et al., 2017). 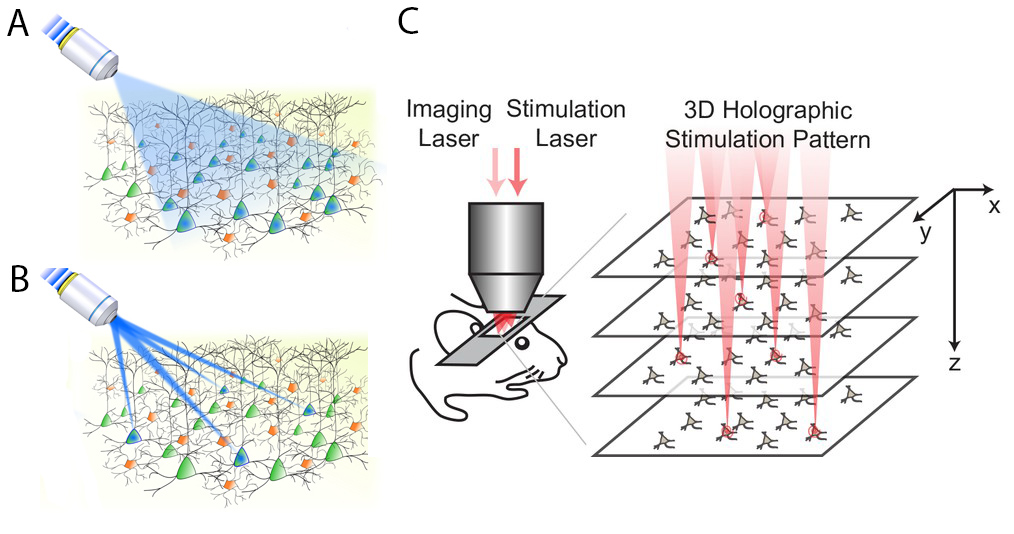 This parallel stimulation strategy sounds simple, but is pretty tricky in practice. One, when you split your light source like this, you typically need much more power in the original light source to achieve the required illumination at each target (this problem is compounded with each additional target). Two, for technical reasons, it is hard to generate targeted light pulses in 3D, so it has traditionally been done in two dimensions. That is, researchers basically choose which neurons to stimulate on a single plane in the brain, but we know that real neuronal circuits are complex 3-D objects that do not fit on a single plane.

In this paper, Yang et al. make progress on both of these problems, coming up with a holographic stimulation protocol that lets them stimulate 80+ neurons simultaneously in a 3D volume of the visual cortex in awake mice (Panel C, which is from the original paper). This stimulation scheme required significantly less power than other approaches. Further, they played this optogenetic tune while recording from the same volume of tissue using two-photon calcium imaging.

We are in the heyday of technological advances in the use of light to stimulate, and record from, brains. It is papers like these that we will look back on as key cogs that helped us ratchet up our ability to sculpt beams of light to activate populations of individual neurons in 3D at precise moments in time.

Is there adult neurogenesis or not? FFS!

Sorry, folks: I don’t have a settled conclusion for you on this topic. What we have is a case of directly conflicting results, published in two great journals, within a month of each other.

For about 20 years, it has been accepted that neurogenesis occurs in adult mammals in some brain regions, such as the hippocampus. This has been pretty clear in rodents, but there is still controversy about whether it is true in humans.

Last month an article came out showing effectively zero neurogenesis in the hippocampus of adult human subjects (Sorells, 2018). For obvious reasons, it generated a great deal of press and commotion. (Some of the reasons are probably bad reasons, as we  know that plasticity does not depend on neurogenesis: even invertebrates with fixed numbers of neurons display synaptic plasticity).

To add to the commotion, less than a month later, another paper came out, also in a top-notch journal, using many of the same methods, drawing the exact opposite conclusion (Boldrini et al, 2018).

Both of these papers seem like good papers. The “no” paper went as far as using electron microscopy to show that there were no neurons with that juvenile bouquet. It also performed control experiments in monkeys, showing adult neurogenesis, demonstrating that they weren’t just having problems with their methods.

On the other hand, the “yes” paper went out of its way to ensure that their subjects were healthy volunteers, and it is known that overall health (which includes factors such as exercise and drug use) significantly influences adult neurogenesis. Plus, it is frankly hard to believe that this veteran histology lab, which is so careful to tightly control its data pipeline, literally observed thousands of false positives.

I have to admit that this topic is far enough outside of my expertise that at this point I will just throw up my hands and say, “Stay tuned.” The story is sure to change. It pretty much literally has to.

Note in response to the initial negative result, Jason Snyder, who does have a great deal of expertise on this topic, has written up an excellent commentary on the science, history, sociology, and implications of adult neurogenesis research: https://snyderlab.com/2018/03/07/wtf-no-neurogenesis-in-humans/.

March 2018 was a pretty good month: there were lots of papers I did not include because this summary is already too long. If there is anything I overlooked, please feel free to leave it in the comments.