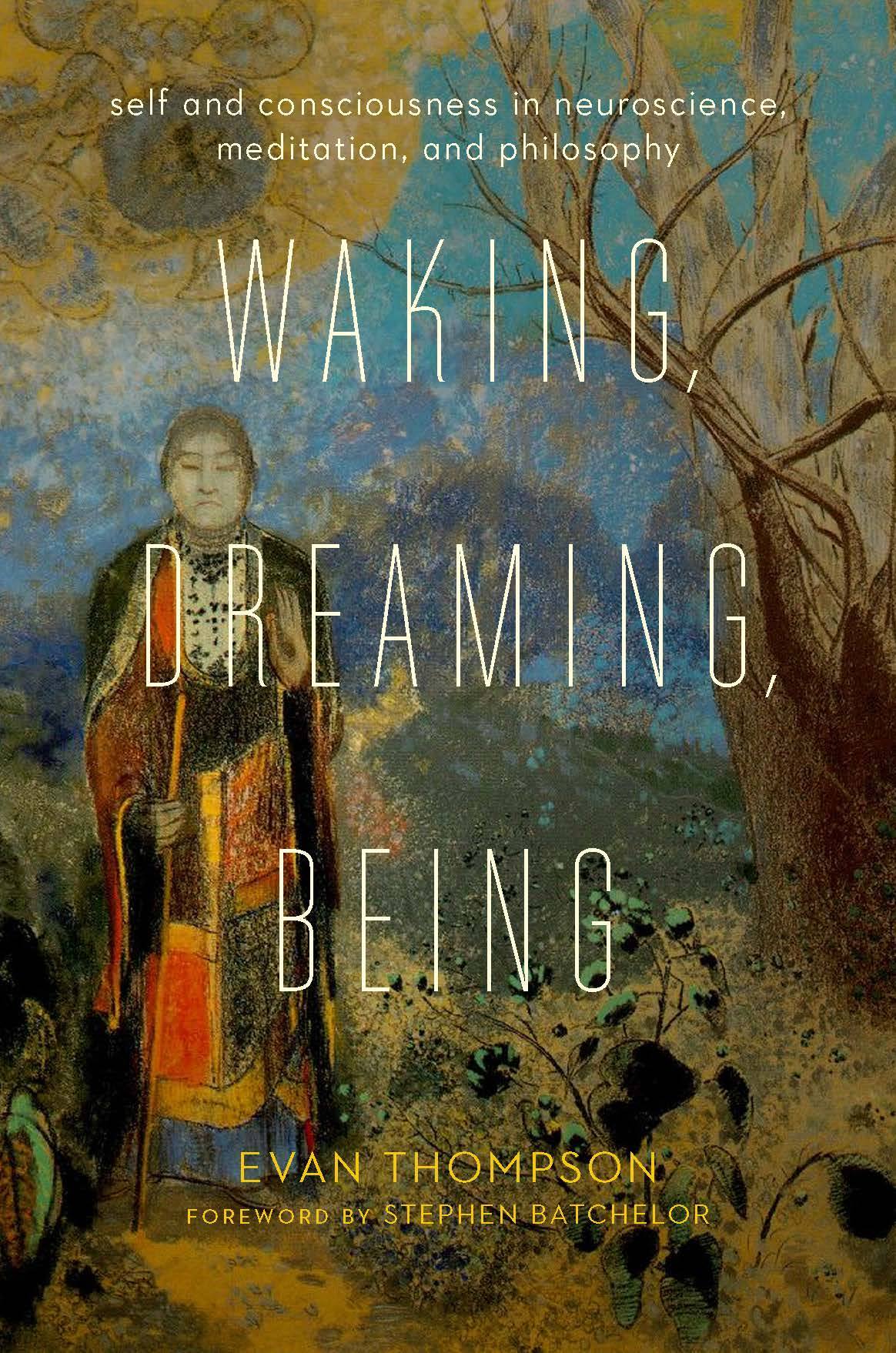 Thanks to John Schwenkler and The Brains Blog for giving me this opportunity to tell you about my work. In this first post I’d like to describe the themes and ideas of my most recent book, Waking, Dreaming, Being: Self and Consciousness in Neuroscience, Meditation, and Philosophy. In later posts I’ll go into a few selected topics and issues in more detail.

The central idea of the book is that the self is a process, not a thing or an entity. The self isn’t something outside experience, hidden either in the brain or in some immaterial realm. It’s an experiential process that is subject to constant change. We enact a self in the process of awareness, and this self comes and goes depending on how we are aware.

When we’re awake and occupied with some manual task, we enact a bodily self geared to our immediate environment. This bodily self, however, recedes from our experience if our task becomes an absorbing mental one. If our mind wanders, the mentally imagined self of the past or future overtakes the self of the present moment.

As we start to fall asleep, the sense of self slackens. Images float by, and our awareness becomes progressively absorbed in them. The impression of being a bounded individual distinct from the world dissolves. In this so-called hypnagogic state, the borders between self and not-self seem to fall away.

At times, however, something else happens. We realize we’re dreaming, but instead of waking up, we keep right on dreaming with the knowledge that we’re dreaming. We enter what’s called a lucid dream. Here we experience a different kind of awareness, one that witnesses the dream state. No matter what dream contents come and go, including the forms the dream ego takes, we can tell they’re not the same as our awareness of being in the dream state. We no longer identify only with our dream ego—the “I” as dreamed—for our sense of self now includes our dreaming self—the “I” as dreamer.

Similarly, while meditating in the waking state, we can simply witness being conscious and watch whatever sensory or mental events occur within the field of our awareness. We can also watch how we may identify with some of them as “Me” or appropriate some of them as “Mine.”

In my book, I take this threefold framework of awareness, contents of awareness, and self-experience—or what the Indian tradition calls “I-making”—and put it to work in cognitive science. Whereas the Indian thinkers mapped consciousness and I-making in philosophical and phenomenological terms, I show how their insights can also help to advance the neuroscience of consciousness.

Let me give a brief overview of the main ideas from the book’s chapters.

Chapter 1 introduces the ancient Indian map of consciousness, which is said to comprise the four states of wakefulness, dreaming, deep and dreamless sleep, and pure awareness.

Chapter 2 focuses on attention and perception in the waking state. I compare theories and findings from cognitive neuroscience with Indian Buddhist theories of attention and perception. According to both perspectives, although the stream of consciousness may seem to flow continuously, upon closer inspection it appears to be made up of discrete moments of awareness that depend on how attention shifts from one thing to another. I review evidence from neuroscience showing that focused attention and open awareness forms of meditation have measurable effects on how attention structures the stream of consciousness into discrete moments of awareness. I conclude by using both Buddhist philosophy and cognitive neuroscience to argue that in addition to these discrete moments, we also need to recognize a more slowly changing background awareness that includes the sense of self and that shifts across waking, dreaming, and dreamless sleep.

Chapter 3 takes up the question of whether the mind transcends the brain and living body, as Indian and Tibetan philosophers traditionally claim. I argue that there’s no scientific evidence to support this view. All the evidence available to us indicates that creature consciousness is contingent on the brain. Nevertheless, my viewpoint isn’t a materialist one, for two reasons. First, consciousness has a transcendental primacy that materialism fails to see. There’s no way to step outside consciousness and measure it against something else. Science always moves within the field of what consciousness reveals; it can enlarge this field and open up new vistas, but it can never get beyond the horizon set by consciousness. Second, since consciousness has this kind of primacy, it makes no sense to try to reductively explain consciousness in terms of something that’s conceived to be essentially nonexperiential, as physicalists conceive the physical. Rather, understanding consciousness as a natural phenomenon is going to require rethinking our scientific concepts of nature and physical being.

Chapters 4, 5, and 6 concern falling asleep, dreaming, and lucid dreaming. I begin with the state leading into sleep, the hypnagogic state. Whereas normal waking consciousness is ego-structured—we experience ourselves as bounded beings distinct from the outside world—this structure dissolves in the hypnagogic state. There’s no ego in the sense of an “I” who acts as a participant in a larger world, and there’s no larger world in which we feel immersed. Instead, there’s a play of images and sounds that holds consciousness spellbound.

This changes in a lucid dream. The defining feature of a lucid dream is being able to direct attention to the dreamlike quality of the state so that one be think of it as a dream. When this happens, the sense of self shifts, for one becomes aware of the self both as dreamer—“I’m dreaming”—and as dreamed—“I’m flying in my dream.”

In these three chapters I review findings from sleep science that show that each state—the hypnagogic state, dreaming, and lucid dreaming—is associated with its own distinct patterns of brain activity.

I end my discussion of dreaming by criticizing the standard neuroscience conception of the dream state as a form of delusional hallucination. Instead, I argue that dreaming is a kind of spontaneous imagination.

Chapter 8 asks whether consciousness is or can be present in deep and dreamless sleep. Most neuroscientists and philosophers of mind today assume that dreamless sleep is a blackout state in which consciousness fades or disappears completely. In contrast, the Indian philosophical schools of Yoga and Vedānta, as well as Indian and Tibetan Buddhism, maintain that a subtle form of awareness continues. I present the Indian philosophical case for deep sleep being a mode of consciousness and show that none of the behavioral or physiological evidence from sleep science suffices to rule out there being a mode of phenomenal consciousness in dreamless sleep. Hence the standard neuroscience way of trying to define consciousness as that which disappears in dreamless sleep needs to be revised. Yoga, Vedānta, and Buddhism assert that the subliminal consciousness present in dreamless sleep can become cognitively accessible through meditative mental training. I present some preliminary evidence from sleep science in support of this idea. I end the chapter by proposing that we need to enlarge sleep science to include contemplative ways of training the mind in sleep. This project will require sleep scientists, anthropologists, meditation practitioners, and contemplative scholars of the Indian and Tibetan traditions to work together to map the sleeping mind.

Chapter 9 investigates what happens to the self and consciousness when we die. Neuroscience and biomedicine talk about death as if it were essentially an objective and impersonal event instead of a subjective and personal one. From a purely biomedical perspective, death consists in the breakdown of the functions of the living body along with the disappearance of all outer signs of consciousness. Missing from this perspective is the subjective experience of this breakdown and the existential significance of the inevitable fact of one’s own death. In contrast, Tibetan Buddhism presents a vivid account of the progressive breakdown of consciousness and the dissolution of the sense of self during the dying process. It also describes how to face this process in a meditative way. According to Tibetan Buddhism—as well as Yoga and Vedānta—great contemplatives can disengage from the sense of self as ego as they die. Resting in an experience of pure awareness, they can watch the dissolution of their everyday “I-Me-Mine” consciousness and witness their own dying with equanimity.

Near-death experiences during cardiac arrest provide an important case for investigating how the mind meets death and the relationship between consciousness and the body. Although these experiences are often presented as challenging the view that consciousness is contingent on the brain, I argue that none of the evidence brought forward to support this position is convincing. Instead, all the evidence to date, when examined carefully, supports the view that these experiences are contingent on the brain.

At the same time, we should avoid the trap of thinking that the reports of near-death experience after resuscitation from cardiac arrest must be either literally true or literally false. This way of thinking remains caught in the grip of a purely third-person view of death. Dying and death must also be understood from the first-person perspective. We need to stop using accounts of these experiences to justify either neuroreductionist or spiritualist agendas and instead take them seriously for what they are—narratives of first-person experience arising from circumstances that we will all in some way face.

Chapter 10 targets the view widespread in neuroscience and neurophilosophy that the self is nothing but an illusion created by the brain. I call this view “neuro-nihilism.” I argue that although the self is a construction—or rather a process that’s under constant construction—it isn’t an illusion. A self is an ongoing process that enacts an “I” and in which the “I” is no different from the process itself, rather like the way dancing is a process that enacts a dance and in which the dance is no different from the dancing. I call this the “enactive” view of the self. This chapter presents a systematic statement of the enactive view and shows how I-making happens at multiple biological, psychological, and social levels. The discussion combines elements from Buddhist philosophy (specifically from the “Middle Way” or Madhyamaka school), biology, cognitive science, and the neuroscience of meditation.

Although cognitive science and the Indian philosophical traditions form the core of my book, I also draw from a wide range of other sources—poetry and fiction, Western philosophy, Chinese Daoism, and personal experience. By weaving together these diverse sources, I hope to demonstrate a new way to relate science and contemplative practice. Instead of being either opposed or indifferent to each other, cognitive science and the world’s great contemplative traditions can work together on a common project—understanding the mind and giving meaning to human life. Two extreme and regressive tendencies mark our era—the resurgence of religious extremism and outmoded belief systems, and the entrenchment of scientific materialism and reductionism. Neither mindset realizes the value of meditation and the contemplative way of life as a source of wisdom and firsthand knowledge essential to a mature cognitive science that can do justice to our entire way of being. My book upholds a different vision. By enriching science with contemplative knowledge and contemplative knowledge with cognitive science, we can work to create a new scientific and contemplative appreciation of human life, one that no longer requires or needs to be contained within either a religious or an antireligious framework.